You are here: Home / Mississippi River Thru-Canoe-2017 / Vicksburg to Melville

We had a nice time at the hotel in Vicksburg…everyone we met was so nice.  This morning we decided to have a relaxed start, so we didn’t start paddling until 9:20am.  It was good to be able to have a slow start to the day.  Our canoes were still right where we left them hidden in the bushes, so everything worked out well.  The day was so calm out…definitely the best day we’ve had on the river in awhile.  The water was like glass for a lot of the day, it was quite warm out, and we saw very few barges.  We couldn’t have asked for more.  The current was flowing pretty good today and we were able to make good time.  We finished up just before 5pm.  There wasn’t very many good options for places to land the canoes, where we could still be close to the navigation channel.  The shore is steep and muddy, so our canoe is currently cantilevered oddly over the shore and water and only tied to our water jug which we put up the hill.  It is supposed to start raining overnight, so we are hoping there isn’t enough rain to fill the canoe and tip it towards the river.  The temperature is perfect for sleeping tonight.  Luckily it seems that the super cold nights are over.

It started raining before we got up this morning.  It was just lightly sprinkling when we started out, but as the morning progressed, it turned to a downpour.  It poured on us for several hours and we were all completely soaked.  During our mid-morning break, we realized that Natchez was only 30 miles in for the day, so we decided to try to get there before any thunder or lightning started.  We figured we would have lunch and wait out the afternoon indoors before heading back out for a few miles and then camping.  We made it to Natchez around lunchtime and just left our canoes locked together on the side of the public boat landing.  Once we got up to nearby buildings to get under the awning, a guy came out from a bar and started talking to us.  When  he realized we are canoeing the river, he bought us all drinks and then went to a nearby restaurant and brought us all back soup since we were cold.  It was so nice of him…we continue to be grateful for all the kindness we have been shown on this trip.  We were pretty chilly and just wanted to get into dry clothes.  We all decided we didn’t want to go back out in the rain and started looking for motels in town.  We got a taxi to the Days Inn in town and are happily relaxing while being warm and dry.  The day is definitely ending on a better note than it started with.

After a slow start to the morning, including waking up without an alarm, breakfast at the hotel, and waiting almost an hour for the taxi to arrive, we finally made it back to the boat ramp (where we had left our canoes) around 9:30am.  We were surprised to see a big steamboat cruise ship, The American Dutchess, parked at the same boat ramp.  The cruise ship was docked there for the day so the passengers could spend time in Natchez.  At first we were worried that we were going to be blocked in all day, but luckily the boat didn’t impede our ability to get out on the water.  A few of the passengers were watching us get things ready and then waved to us as we headed out on the river.  It was pretty windy in the morning and the river was really choppy.  It felt like we were moving slowly, but our perception often seems to be warped as we made reasonably good progress.  It was quite warm and humid out today.  Although the day started out grey and overcast, the skies cleared up during the afternoon.  We had an early lunch and then tried to keep a good pace even with the rough water and wind.  Shortly before we finished for the day, we went by two very big barges (both 6×7, 42 total barges in the load ), and one was passing the other.  The wake that they kicked up was pretty fierce and we went through it as we started to look for a campsite next to the navigation channel.  Just a few minutes before reaching shore, we went through some big waves and the water came rushing over the bow, soaking SweetPea.  It is still pretty warm and humid as we try to go to sleep.  The mosquitoes are back tonight for the first time in several weeks and they are insane.

Two big milestones for today.  The first is that we have left Mississippi and now have Louisiana on both sides of the river.  This is the first time the river has been in just one state since we started in Minnesota.  The second big milestone takes some explanation.  Folks that paddle the MS River see that there are two main ways to finish the trip.  The obvious way is to go all the way down the MS, past Baton Rogue and New Orleans to the gulf.  The other main way to end the trip is by leaving the MS River and getting onto the Atchafalaya River and taking this down to the gulf.  The “Atch” is much quieter and smaller than the MS.  It is also where the waters of the MS would currently flow if the Army Corps of Engineers did not build structures to keep the water in the MS.  Talk is that New Orleans would dry up if the water from the MS was allowed to flow freely.  In any case, both endings are very widely accepted in the paddling community.  We’re not sure what percentage of paddlers take each route, but we have gotten recommendations to take the Atch for multiple reasons….the MS at the end is seen as more dangerous (ocean-going vessels get added to the mix), the air and water are more questionable (chemical plants along the river), and you have to go through the port of New Orleans.  For us, the Atch just sounded better.  We didn’t want to have to go through another major harbor and it seemed like the Atch would be more like the Upper MS River, which we figured would be a good way to end the trip.  So, the second big milestone for the day was that we left the MS River and got into the Atchafalya River.  This morning, we went by three “outflow” areas which the Army Corps had dammed off (basically the water trying to get to the Atch).  Because the outflows are dammed off, we had to get to the Atch via a connector channel.  We missed the channel when we first went by it because it was small and kind of hidden.  We went a half mile past it and then had to paddle upstream back to the entrance…not fun.  We figured it was the MS River getting the last laugh out us.  The channel started with a lock, which seemed deserted when we got there.  There was no cord to pull to announce our arrival and when we tried calling the lock, the phone tree kept hanging up on us.  We were about to portage around the lock when someone finally came out and noticed us.  Once we were in the lock, it sounded like a crazy, creepy lock.  Beardoh said it sounded like an evil orchestra tuning up.  Basically the creaking of various components was echoing off the cement walls, but we had never experienced anything like that at the other locks.  Once we got through the lock, we had six miles of a channel that have zero current.  It felt like torture paddling normally, but feeling like we were barely moving.  But, we made it through and got onto the Atchafalaya in the late afternoon.   We got to camp around 5pm and managed to find tolerable spots in the overgrown woods.  Beardoh even found the remains of an armadillo while he was looking for a hammock spot.   Today was anything but cold, with temps in the 80’s and very humid.  It is going to be another sweltering night of sleep with a battalion of mosquitoes buzzing right outside our hammocks.

The first two hours of paddling this morning were in thick fog.  At times we really couldn’t see anything.  We could faintly see the treeline on at least one shore, but we were going more by feel.  When we would stop for a quick break, we had to be careful to keep our bearings.  Luckily the river is so quiet and there were no other boats out, so there were no issues.  We definitely wouldn’t have paddled in that thick fog if we were still on the MS River.  We are now able to go faster than we had expected on this smaller river, keeping almost a six mile per hour pace.  It is nice to be back on a smaller river, where it feels like we have the whole river to ourselves.  Our destination for the day was the home of a river angel.  We made good time, and even with a long lunch, made it to his house just after 1pm.  Danny has made us feel very welcomed and at home.  It is good to be clean and in air conditioning.  It will be hard to leave this place tomorrow morning. 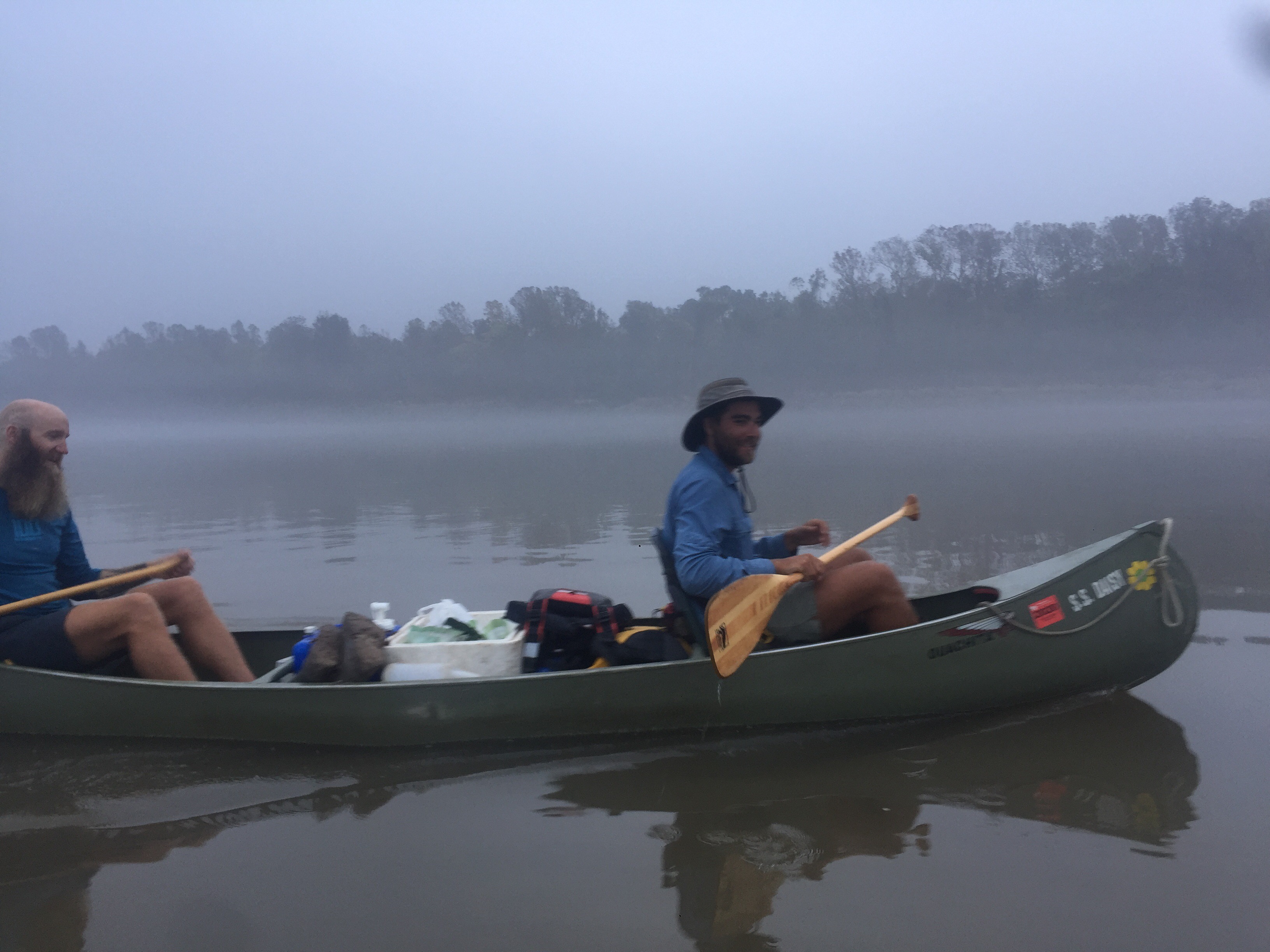 « Memphis to Vicksburg
Melville to THE GULF! »