After a crazy busy and often stressful winter, we are ready to feel the trail under our feet, gaze at a night sky full of stars, and see some new parts of the US by foot again.  This year, we are planning to for our longest hike yet…the Continental Divide Trail!

We’ve been planning for a 2020 hike of the CDT for several years.  We wanted to be able to hike the trail with several friends and their schedule dictated waiting until this year for the hike.  That was fine with us, as we had the opportunity to hike several medium-length trails in the meantime.

So, we are excited to be hiking the CDT this summer with our friends, MountainMan and Ace.  We’ve even talked our friend, Mace, into hiking with us through New Mexico.  So, it’s going to feel like a party!

The CDT is a special hike for us, in that it is the last of the Triple Crown trails to complete for both of us and Mtn Man.  It is a hike that we knew we’d always do, and finally, the time has come.  We recently learned this fun factoid: as of this writing, less people have completed all 3 Triple Crown Trails than have been in outer space!

The five of us hiked together for a short stretch in Arizona last spring on the Mogollon Rim Trail.  Our personalities all mesh really well and there usually ends up being a lot of laughter…definitely not a bad thing on a long trail.  We hiked most of the PCT with MountainMan in 2016 (and spent time with Ace during our first two weeks of that PCT hike)….. and we’ve hiked with Mace on the JMT, the MRT, a few weeks on the GDT and a month on the AT.  Even though it is unusual to start a long trail as such a big group, we’re not really worried about it.  In fact, we are really psyched about spending so much time with some of our very favorite people.

The CDT is an interesting trail, in that there are a lot of ways to crack this particular nut.  There are a lot of alternates to chose from along the way, and it is not uncommon for hikers to skip around and complete the route in a non-linear manner.  Since the trail is so long (just shy of 3,000 miles) and the weather window can be pretty short, it often just makes sense to modify your plans as needed to accommodate trail conditions, instead of hoping the trail will conform to your needs.

In an effort to minimize the time we will be hiking in snow, we already have plans in the works for a “flip-flop” style of thru-hike.  What this means in practice (other than the many hours of driving it will require) is that we will start our thru-hike by hiking northbound for the length of New Mexico.  Then get ourselves up to Wyoming (via car) and hiking southbound back to New Mexico.  Once we get to the point where we had originally stopped, we will get ourselves back to Wyoming (via car again) and continue hiking northbound to the Canadian border.  This flip-flop style of hiking definitely requires more logistical planning, but in the end, we see a lot of benefits.

The way we see things, here are the benefits of the flip-flop:

We’re hoping to be able to complete the hike in five months, meaning we would be at the Canadian border in the middle of September, which feels reasonable to us.  We know that if we push our finish time later into September, we run the risk of encountering some early season snow. 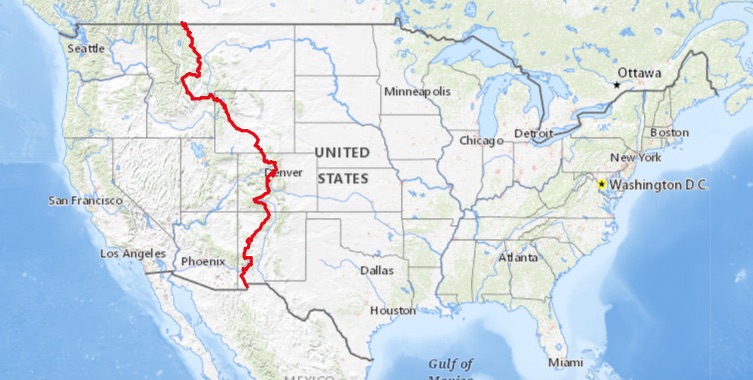 Some fun facts about the CDT:

We plan to start the trail on the 17th of April.  We expect the trail to be a bit busy at the beginning, as we are perfectly timed to hit CDT Trail Days in Silver City, NM about nine days into the trail.  We assume that other hikers are timing their start to make it to Trail Days as well.  When we hiked the Grand Enchantment Trail in 2018, we were amazed at the number of CDT hikers we encountered in Gila Hot Springs (a CDT town stop just north of Silver City).  That bubble of hikers were all coming from Trail Days, so we expect to be in a similar hiker bubble at the beginning of the trail.

A few pieces of gear change in 2020.  Beardoh has a new quilt this year – a Katabatic Flex 22 degree.  He has had 2 other Katabatic quilts in the past.  Currently, are sewing new backpacks for the CDT trip, since our current packs are three seasons old and are getting a little long in the tooth.  We are also buying new headlamps, as ours are nine years old (the only headlamp we’ve ever used since starting the “backpacking” phases of life) and one has a broken button.   We are also going to be taking a tent with us for the first week and a half and then switching to our hammocks.

Things we are looking forward to on the CDT:

Our past few spring hikes have seen us in Arizona enjoying the company and generosity of our Trail Angel friends, Purple and Carnivore.  Although we won’t be seeing them this spring (which feels a little weird), we will have the good fortune of seeing our friend, Purple Haze (who we met on the GET) and benefiting from his Trail Angel-ing generosity. It always feels good when these trips start off with such a positive experience.  It feels like things are set in motion for good vibes and lucky generosity to follow us on the trail.