You are here: Home / Mississippi River Thru-Canoe-2017 / Melville to THE GULF!

We had a great time with Danny at his house.  His generosity was so appreciated.   He let us take his car into town to resupply, he set us up with his four wheelers to drive up onto the levy to look for alligators in his pond, he cooked us a delicious dinner and breakfast, and kept us all entertained with funny and interesting stories.  We had a great time hanging out with him and it was tough to leave this morning.  Our schedule is going to feel a bit strange for the last few days of the trip, as Daylight Savings Time ended last night.  So now we will be starting at 6am and finishing at 4pm (instead of starting at 7am and finishing at 5pm).  Today we got a late start, leaving Danny’s at 8:30am.  He sent us off with a bag of fried chicken and biscuits so our lunch today was much more exciting than usual.  It was a nice temperature and a bit cloudy when we left.  We had some wind today, with it getting stronger in the afternoon, but being on a smaller river, we didn’t have any big waves like on the MS.  We saw our first alligators today.  We saw two who were just sunning themselves on the shore, and two others who slid into the water once we paddled by them.  Alligators are just so foreign to us that they make us a bit uncomfortable.  Danny told us that they will usually just take off if we are near, so it is good to hear that they aren’t aggressive.  We noticed during the day, that there wasn’t much for good landing spots for camping along the river.  That didn’t change when we finally stopped for the day.  The shore is really muddy and soft, so there has been some slipping and sliding.  We are hammocked pretty close to the water tonight.  We were hoping for a bit of a breeze (being close to the open water), plus the woods are pretty overgrown.  The mosquitoes are pretty insane again.  When we get into our hammocks, there are usually at least 20 mosquitoes to be killed.  It seems a bit crazy to be going to bed by 5:30pm, but it is dark at that time, so that’s when we go to bed on the river.

This morning we woke up to fog that was as thick as pea soup.  It was impossible to see anything ahead, so we just kept close to the shore and had our headlamps on in case we heard a boat, we could turn our lights on and let them know we were out there (so far, none of the motorboats we’ve seen in the dark of the morning have had any light on, which we find rather crazy).  There was a lot more boat activity on the river today which made the fog uncomfortable to paddle in.  We came across two barges that were running, but were parked on the bank, so we had to paddle in front of them, which was a bit unnerving the first time.  All of their lights were off, so when we heard them, we weren’t sure what it was and just slowly crept up to it until we could make out it’s shape in the fog.  The fog didn’t lift for three and a half hours!  We were all really annoyed with it by then and just wanted it to be gone.  The fog is kinda cool for awhile, but that romance dies off when there are bigger boats out on the river.  When we stopped for a mid-morning pee break, we unknowingly came right up on an alligator.  It was in the water, right up next to shore.  We figure SweetPea’s paddle must have woken it up.  It was pretty small and once it realized we were there, it took off like a bolt of lightning…we didn’t even have time to get scared!  The paddling was pretty calm except for a few windy spells.  There has been so little camping options that we see during the day (and a lot of the shoreline is posted as private property), but we had read notes from another paddler who mentioned a sandy point with good camping.  As luck would have it, it timed out perfectly with us reaching the spot right at 4pm.  The mosquitoes continue to be horrendous, but we were able to eat dinner on the beach in relative peace.  We ran out of fuel for cooking last night, so we have been using Safety’s fuel since he has a bunch left and can’t take it with him on the plane home.  We are all tucked into our beds by 5:30pm.

When we started the day, we weren’t sure if it was realistic for us to finish today or not…we had originally planned to finish tomorrow.  We didn’t know if there would be any current in the bayous and we had over 25 miles in them.  But, we figured we would just see how the day went.  Once again, it was pretty foggy as we started out.  We knew that we would be getting off  the Atchafalaya and onto the Yellow Bayou in four miles, so we hugged the shore to make sure we didn’t miss the turnoff.  While the Atchafalaya River does go to the Gulf, it ends in a spot where there is no car access, so one would need to paddle back upstream.  That didn’t sound good to us, so we decided to follow the route posted by another paddler, which brings you out to the Gulf just a mile and a half from a campsite where Beardoh’s mom will be able to meet us.  We found our bayou turnoff without any problems.  It was pretty narrow, and as we were still paddling in the fog, we could hear a motorboat coming towards us pretty quickly (of course, without any lights on).  We got off to the side, and Beardoh also blew the airhorn, the first time on the trip (we bought it after several bad incidents with recreational boats in Iowa).  The boat slowed down after that and we were able to pass without any problems.  We were surprised by how much current there was in the bayou and we made pretty good time.  We made another turn into Hog Bayou which was fairly narrow and really twisty.  We couldn’t believe how many alligators we saw in Hog Bayou…there must have been more than twenty…some on the shore, but a lot in the water.  We also saw multiple bright pink birds on this stretch.  We had never seen them before, and they were pretty awesome.  We decided not to stop for lunch on that stretch because of all the alligators and figured we were close to the Gulf, so we would just wait.  It was good that we didn’t end up needing to camp along today’s stretch, because it would have been nearly impossible.  We ended up making it to the Gulf around 1:30pm, and then we had about a half hour of paddling in the Gulf to get to the Burns Point campsite.  Luckily the water in the Gulf was relatively calm, but it was still weird to have the waves coming from the side, as we paralleled the shore.  We were so happy to arrive and to be finished with the trip.  We were glad that we had a really nice day of paddling to end with.  The afternoon was spent cleaning and organizing our canoe and gear.  We have folks coming here tomorrow to buy our canoes and then we are headed into Morgan City for the night.  We’ve been trying to process this trip in our minds over the last week.  Surely there will be a post or two to come about our thoughts.  Thanks for following along! 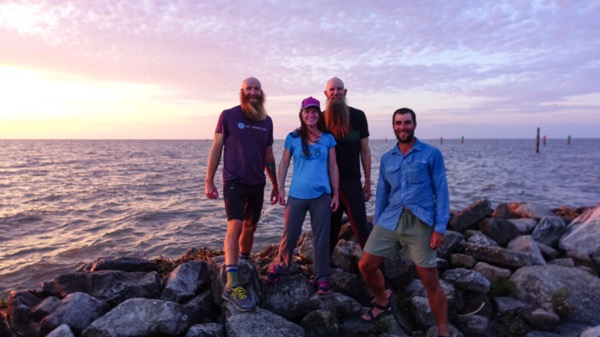 « Vicksburg to Melville
Hammocking, but no trees? An All-Terrain-Setup »