We went with the early start today, both for the desire to make up miles from our short day yesterday and for the chance to hike more in the morning before the temperatures get too hot. So, we set our alarms for 4:45am and we’re on the trail by 5:15am.

We passed three more bikers before 6:30am…it looked like they had been riding through the night and were pretty beat.

After about three miles, we got to a public water cache. Our friends, Purple and Carnivore, has driven out to the spot a week ago and dropped off over 30 gallons of water. This was the first time they had been out on the FR 4, and they described a very harrowing experience to us. It took them two hours to go five miles on the road to the cache and was pretty stressful. They had wanted to put out water for us which was really kind. So, in all the water they left, they marked three gallons for us. Sadly, when we reached the cache, there was only a small amount of one gallon left for us. It was pretty disappointing to see folks using water designated for a specific hiker. Basically what they are doing is taking their problem and making it someone else’s problem. Not cool.

Luckily, we didn’t really have faith that the water would be there, since we knew the public water had run out the day before and the temperatures have been high, so we had left Picketpost with enough water to get us to the first natural water source if needed, which it turned out it was.

After six miles, our trail diverged from the AZT. They took the new trail which was routed out of the wilderness area so that it was accessible to mountain bikers. We took the old AZT, which sees very little use these days. The trail was pretty hard to follow at the beginning. There were many times where we just had to stop walking and both scan the area for signs of little cairns to show us where to go. Our pace definitely slowed down in this stretch.

The scenery in this area was really beautiful and we enjoyed the remoteness. We saw several old AZT signs, which we thought was weird…seems like they would have taken them down once the trail was rerouted.

After some time, we came out onto a pretty rough dirt road. We climbed to the pass on the road and came across a group of mid-westerners out for a Jeep caravaning afternoon. They seemed pretty surprised to see us walk up.

We headed down the other side and the road was really steep and rocky…definitely not a road we would want to drive on. Near the bottom of the road, we came to a big wash and went in search of a water source that was supposed to be there. We found a small seep which had some nice water.

While we were taking a break by the seep, we were surprised to see two hikers come down the wash. They seemed equally surprised to see us. They were both hiking the AZT and decided to try something different by taking the old AZT route. One of the guys, Crash, we follow on Instagram, so it was fun to meet him. The other guy, Square Pants, had had a crazy day, as he had been attacked by a bobcat. He showed us the big gash on his leg from the encounter. They were planning to get into Phoenix today to see a doctor. Pretty scary.

After they continued on, we packed up and starting walking the wash for the next several miles until it ended at the Gila River. Even though the Gila is not recommended for drinking, we took a couple liters each to make sure we could get to the next water source. We treated it with colloidal silver and ran it through a filter (which got pretty dirty!), it still tasted a bit dirty.

The rest of the afternoon had us back on the regular AZT. We met several more AZT hikers and two more mountain bikers. The hiking felt a bit boring this afternoon, but the heat finally started to wane and it was pleasant walking, even though we were super tired.

Our feet really feel like they have had a rough time so far. The rocky and sandy trail has been hard on them, and for sure the heat doesn’t help. Beardoh generally never gets blisters, but now he has several blisters going. SweetPea’s feet have been feeling pretty sore too.

We got to camp around 7:00pm, so we were wearing our headlamps for a lot of our bedtime prep. Somehow SweetPea had gotten a cholla ball in one of her shoes and before she realized it was there, she rubbed her shoe on her other ankle, basically embedding all the needles in her ankle. Needless to say, it was very painful.

As we were laying in our sleeping bags, we realized that somehow we were off in our schedule for the first week of the trail. The only “deadline” we have is a permit for going through the Aravaipa Canyon around mile 150ish. This is a permit we had to sign up for months ago…there are no walk-up permits and only 50 people are allowed in the canyon per day. Somehow we are short one day, so now we have to do big miles for the next three days in order to get to and through the canyon in time. We were bummed to realize this, because we don’t like that pressure, and the heat is only going to be worse for the next few days. Ugh. 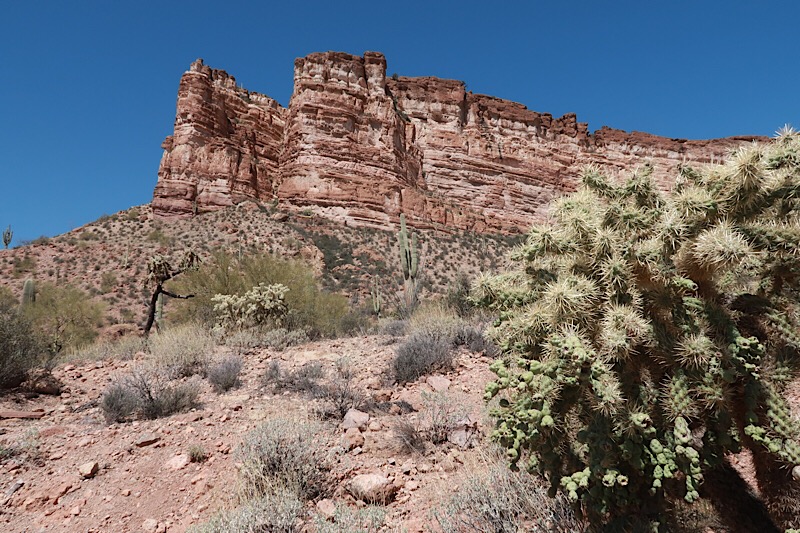