After a relaxing afternoon and evening in the motel, we were lucky enough to get a ride back out to the trail this morning with the husband of the motel manager. We have been lucky to have some really nice motel proprietors on this trip. The folks at the motel in Mountainair were really kind and helpful.

We got back on the trail at 7:45am and of course, started with several miles of walking in a wash. As usual, there were multiple barbed wire fences that we had to crawl under. That has been pretty typical on this trail, especially in the past five days. This morning, we just had three close together, so it felt like we were taking our packs on and off all the time. Near the end of the wash, we walked under a train trestle and even saw several trains go by during the morning.

There was about four miles this morning of walking on a two-track road which has recently been signed as private – no trespassing. The GET will likely be rerouted after this season to avoid this stretch, but we decided to take our chances and go through. It is weird that in a lot of places on the trail (especially in the past week), people have put up “private” signs or have locked a gate on land that is (according to our maps) public land. It could be BLM land which a rancher is leasing, but it is still public land. There certainly seems to be some confusion and inconsistency with signage in the middle of nowhere.

But, we figured the likelihood of seeing someone on the road was low, so we crossed the fence and continued on the road. We decided it would be best to just try to get through that stretch quickly, so we didn’t stop for any breaks. Not surprisingly, we didn’t see anyone and the passed another fence into National Forest land.

The walking in the morning was a steady, very gradual uphill climb. After five days at low elevation in terrain that was quite barren, we were anxious to climb up to a higher elevation and get back into the mountains. As the miles passed, the vegetation gradually changed from just junipers and cacti to pinyon pine and eventually ponderosa pine. It was nice to be able to walk in a bit of shade again.

We stopped in the early afternoon for a break and when we were packing up to get going, we saw our first GET hiker on the trail! It was a surprise to see a hiker coming towards us, and we were happy to see that it was Purple Haze. We had noticed that his footprints were absent this morning, and it seemed that he just got back to the trail a little after us. We stayed and talked with him for about a half hour before continuing down a dirt road.

We came to our first water source of the day at 15 miles in. It was at a trailhead with privies, trash cans and picnic tables. We seriously considered stopping there for the day (even though it was only 3:00pm) and even did the math to see how it would effect the coming days. We decided that we should keep walking, as there is a weird stretch coming up where camping is prohibited for over 20 miles. So, we need to get ourselves in a good position over today and tomorrow to make that no-camping stretch work.

So, we kept hiking and started in on our first real trail in five days. It was really nice to be on a trail, in the pines, in the mountains. The elevation profile had looked rather intimidating for the climb, but it turned out to be really nice. Clouds had come in and it was quite windy at times, so it was prefect temperatures for a climb.

The first few miles of trail were really good, and then we got into a few miles of trail that had suffered a fire in the past. This section had a lot of downed trees and just took a big longer. The trail was also fairly overgrown in the section with lots of thorny plants.

As we got higher, we were often walking on a ridge. We had great views down to the desert floor. It was pretty amazing to see the mountains just rising so dramatically out of the desert. We have really missed having these kinds of epic views, and it is great to be in mountains again.

We managed to find a fairly flat spot which is out of the wind. We walked a bit later than normal tonight, but we were both feeling good, so we didn’t mind. We are camping at over 9,000 feet of elevation, so it should be a chilly night.

Purple Haze came by as we were setting up camp and he decided to hike a bit further. Chances are good we’ll see him in the morning, since we tend to get an early start. It is strange and nice to have another hiker around. 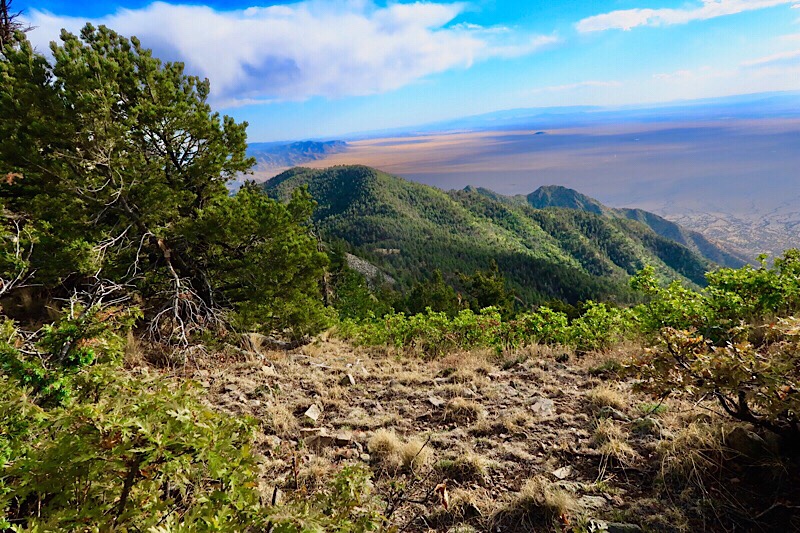 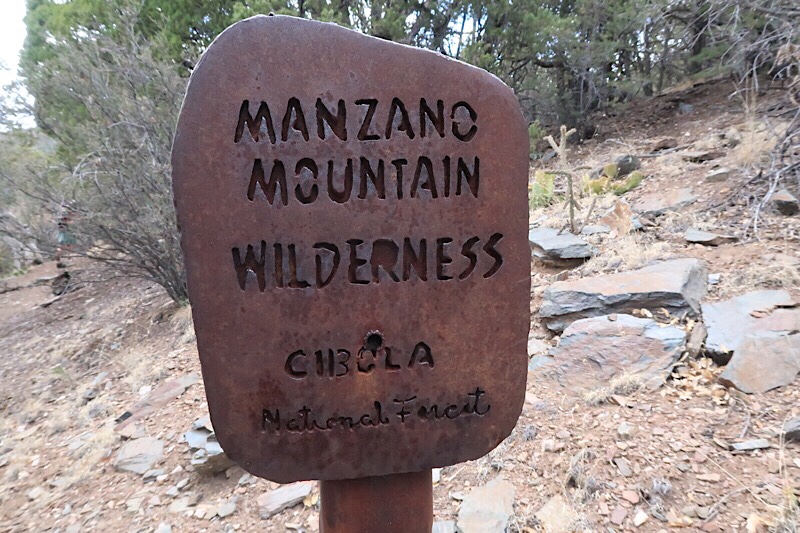 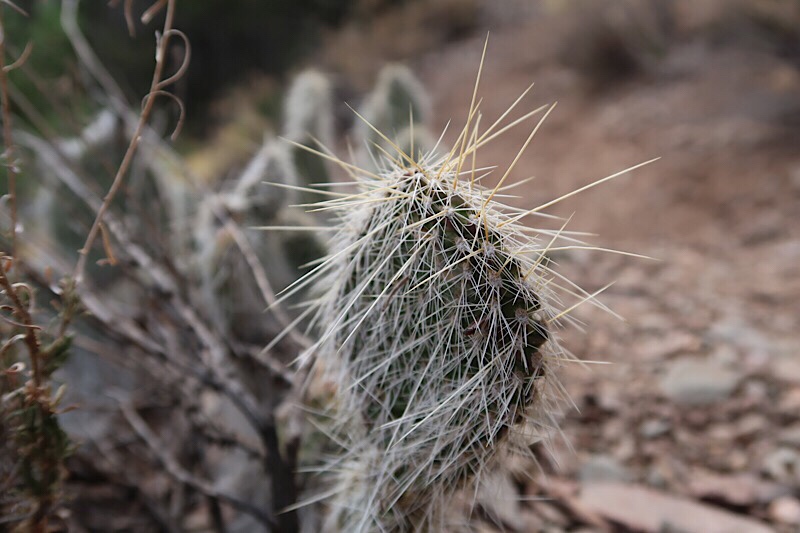