We had a nice night sleeping in the wash. It was quite cool out this morning, so we decided to start with an extra layer of clothes.

We realized we had missed a turn at the end of yesterday, which had kept us in the wash. Instead of backtracking, we just took a more direct route back to the trail (which at that point was a cow path). The thing about cow paths, is that there is often a lot of them in one place. So, they end up crisscrossing each other and it can be confusing. The only way to be sure you’re on the right one is to use the GPS.

We only had a short bit on the cow path and another wash before we ended up on a nice dirt county road. This took us straight to the main road where we planned to hitch into Mountainair.

Luckily it was cool and breezy out this morning, as we had to wait for an hour and ten minutes before someone picked us up (Looks like our quick hitching luck on this trail has run out). We got a ride in the back of a pickup which is Beardoh’s favorite thing. Riding in the open back, with the wind blowing on us and the sky a deep blue…life doesn’t get better than that.

We made it into Mountainair just after 9:30am and stopped into the motel. It was a good thing that we had gotten in early to reserve a room, as the owner said she had to turn a hiker away yesterday. The room wasn’t ready so we walked into town to get food and do laundry. We even decided to wash our backpacks which have gotten really dirty on this dusty trail.

Getting into town with hours ahead of us to relax is never a bad feeling. 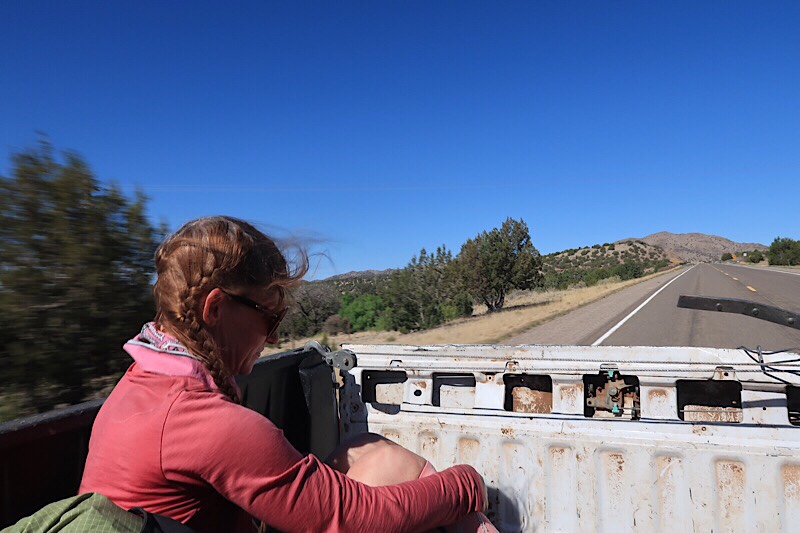