When we went to bed last night it was so warm out, we figured it would be a really mild night…we didn’t even have our jackets on. Well, we were wrong and it got really cold overnight. We both woke up in the middle of the night to add an extra layer to our sleep system.

Once we got moving in the morning, we warmed up pretty fast. As soon as the sun hit us (which was very quickly since we were basically walking in a field of dried grass) it was obvious that it was going to be a warm day.

The morning was pretty much just spent walking on two-track (basically a “road” which just has the track marks from two tires). It was actually quite pleasant and easy walking. Of course, there was a bit of cross-country thrown in and even the crawling under a fence.

We saw a herd of elk as we were walking down the road. They seemed to sense us, even though we were far away and ran up the hill. Great hearing.

We were walking through area which is managed by the BLM and used by local ranchers for the grazing of the cows. Usually the cows are quite skittish and run off if you come anywhere near them, but today we had a herd of white cows that seemed to be quite interested in us. They ran towards us and just kept following us as we walked down the road. We kept trying to scare them off, but they didn’t get spooked easily. Who knows what was up with them…maybe the rancher gives them treats when he comes out.

We made it out to the road where we could hitch into Winston around 9:45am. We decided to walk the half mile of road that the trail takes, since we were waiting for a car anyways. We ended up walking a bit further down the road in search of shade. Even though it was still morning, the sun was getting pretty intense.

We probably didn’t even wait 15 minutes before we heard a car coming from the wrong direction. Beardoh figured he would walk out to the road anyways in case the car might be turning around. The car turned out to be a trail angel near Winston named Heather who was giving another GET hiker (Purple Haze) a ride back to the trail. So, we got to meet the GET hiker named Purple Haze. We have seen his name in trail registers, but didn’t realize we had gotten so close to him. They headed a half mile up the road to drop him off and then Heather turned around, picked us up and we headed to Winston. We couldn’t believe our good luck with the hitch!

As we were talking with Heather on the road, a bike packer passed us. When we passed him in the truck a few minutes later, he seemed to be having a rough time. Heather offered him a ride to Winston, so we loaded his bike in the truck and we continued on.

It was fun talking with Heather about her hikes (PCT and CDT) as well as her and her husband’s move to New Mexico about a year ago. She was really sweet and interesting and before we knew it, we had made the half hour or so drive to Winston.

She dropped us off at the general store where we got drinks and snacks. The kind folks at the store let us charge up our electronics and there were shaded picnic tables outside…perfect.

When we were in the store, we talked with a guy who was mentioning a controlled burn that was taking place in the Black Range along the CDT today. We realized we had walked through that area two days ago and had even seen the signs for the areas to be burned. We were really glad we had made it through when we did. We’re not sure what we would have done if we came to the trail when it was closed down for the burn. Hopefully there aren’t any GET hikers behind us who are finding themselves in a pickle out there.

Beardoh went to the post office and got our packages…one resupply box with 5 days of food, and two boxes with new shoes. Then we got some hot food from the store for lunch and enjoyed our food at the tables outside.

We were so happy to get our new shoes today. This trail has been pretty rough on our shoes with all the rocks. SweetPea’s shoes had gotten to the point where they provided about as much protection from the rocks as a sponge. As soon as she put on her new shoes, she could feel the difference. Beardoh’s shoes have really worn unevenly in the heels, possibly from the constant uneven surfaces we are walking on.

After eating lunch and sorting our food for the next stretch, we started to think about getting back to the trail. We had read in another hiker’s blog that the woman in the post office lived near the trail and could give a ride back…but when we checked, that lady didn’t work there anymore. Heather had said that she could take us back in the evening, but we were hoping to get back sooner. We asked at the store, and they said there might be parents coming to pick up their kids from school around 4:00pm and maybe one would give us a ride. We decided we might as well start trying our luck out on the road, even with almost no traffic.

We walked about a quarter mile from the store and found a tree we could wait under. SweetPea suggested we take 10 minute shifts, where one of us would stand and keep watch while the other sat down. That way we wouldn’t both be standing for potentially hours. Well, we didn’t even make it to one shift change, as we got a ride from the second truck that came by! We couldn’t believe we were able to get a hitch in under 10 minutes! Our hitching luck on the GET has been really incredible.

It turns out that David has lived in the area his whole life and is currently working as a guide for hunting elk and mountain lions. It was really interesting to talk with him and he was so nice. He gave us sodas and drove us right to the trail. Given how “out in the middle of nowhere” the trail was, we couldn’t believe how smoothly it went getting into town and back to the trail.

The trail started back up at a gate which it posted as private property. Apparently there was a big property dispute about two years ago involving the Monticello Box Canyon, which the GET used to go through. It is supposed to be one of the true gems in NM. It seems one of the land owners claimed the box canyon as his private property which then went through a big legal battle, which the land owner won. So, now most of the canyon is off-limits to the public, although the road marked private is actually ok for pedestrians to use. It seemed like the topic of the canyon was a pretty important issue for the town.

We walked to the opening of the canyon and looked in as far as we could. There was a gate near the entrance that we didn’t want to cross. But what we saw was pretty cool. It would have been great if the trail was still able to go through the canyon.

We picked up about 10 liters of water total near the canyon, as we were heading into a 21 mile dry stretch. Talking with a guy at the general store today, he said it was about 15 degrees warmer than normal and it was expected to last a few more days. So, we figured it was best to take a lot of water with us.

Since the trail had to be rerouted in a place with seemingly no trails, we started in on a long, mostly cross-country trek around the canyon. We spent the remainder of the day walking through washes, which can be tiring, as you are mostly just walking in sand.

The sky was starting to look pretty ominous as we stopped for the day, so we decided to put up our tarps. The ground here looked like it would be good for putting in stakes, but in fact it was as hard as a rock. That made things a bit tricky and we ended up using big rocks to help stake out our tarps. We did feel about two raindrops before the weather seemed to clear. Hopefully it will remain still and dry overnight. 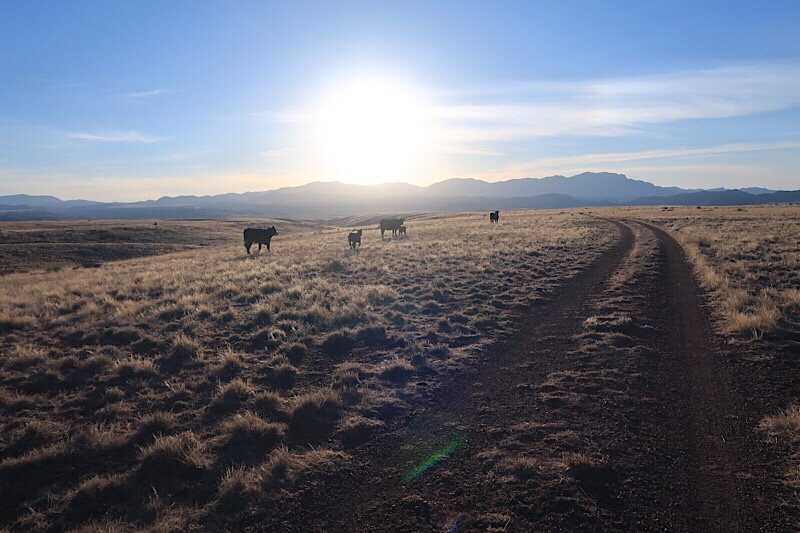 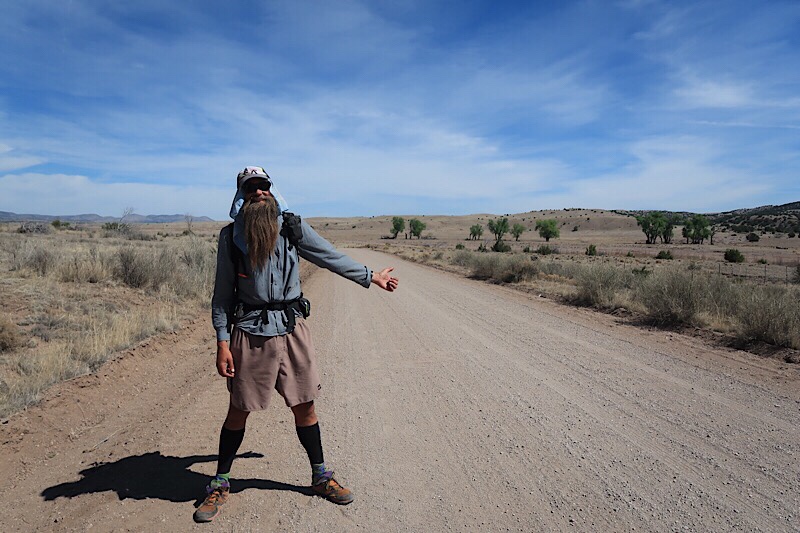 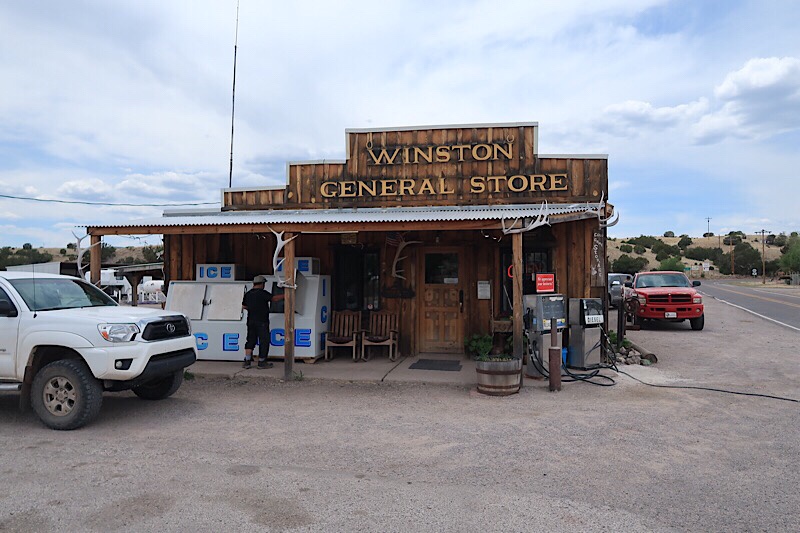 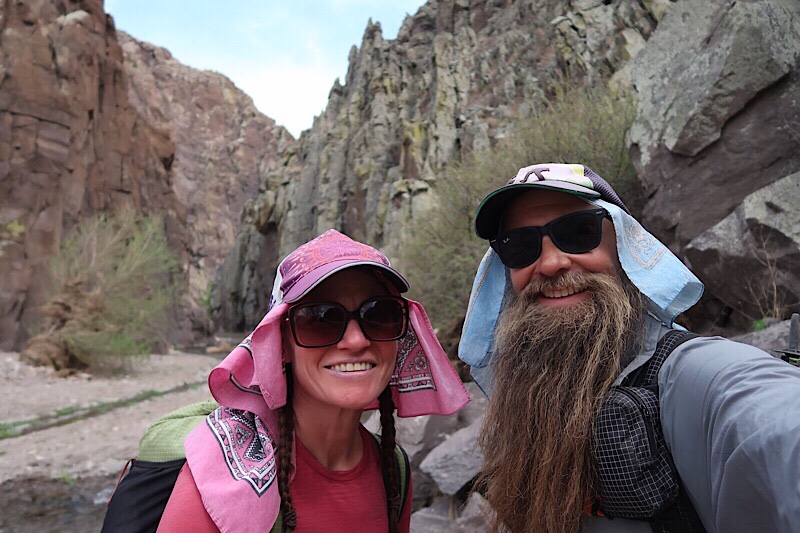 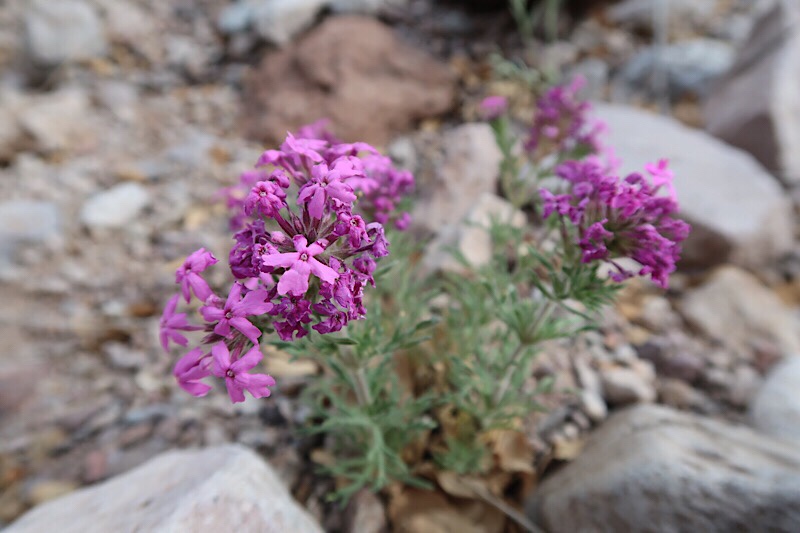