You are here: Home / Grand Enchantment Trail 2018 / GET Day 29: Goodbye to the Gila National Forest

Last night turned out to be perfect weather for sleeping outside. Probably the least cold night we have had in awhile. After walking 10 minutes this morning, we were really glad we had stopped when we did last night. We walked into a shallow valley and the temperature instantly dropped. It was pretty amazing the difference between where we had slept and just half a mile down the trail.

We continued on the CDT for about 3/4 of the day. It has been nice the past few days to be able to have frequent trail signs to follow so we are sure we stay on the trail. We usually look ahead for the triangular national scenic placard, or we would look for the old time i-blazes on the trees.

We seemed to stay around 8,000 feet of elevation for most of the day. The trail usually had a long gradual descent, and then a short steep climb to make up for any elevation lost. The climbs were pretty steep, but they were usually short enough that they were over before they got to be too much.

It seemed like we were followed most of the day by a gang of flies and gnats. They were really annoying and even still are buzzing around us as we lay in our sleeping bags. They seem to prefer flying right between our eyes, at the bridge of our noses, for maximum annoyance.

This morning we saw our fourth fox of the trip, and our first live one! We saw it cross the trail and head into the woods, so we stopped and watched it. It must have figured that we weren’t coming anymore, because it then turned back to the trail and we were able to watch him walk down the trail for a bit since the forest was so open. Pretty cool!

Most of the walking today felt like we were kind of in the foothills, even though we were high up. When we had views, it looked like there were vast, dry plains just beyond our hills, with big mountains off in the distance. We seemed to have that view from multiple sides, as though we were on a mountain island in a sea of grassy fields.

Near the end of the day, we finally left the Gila National Forest. We’ll have to look at it on a state map sometime to see how big it is. We have been walking through it for eight days now, so it feels huge to us.

We made it through the day without any water sources. We certainly saved some time that would otherwise have been spent on getting water and doing laundry. We are currently camped about three miles before our next water source. We have about one liter between the two of us. That should be fine in the morning, as it will be cool.

We have just under eight miles to NM 52 where we will hope for a hitch into the town of Winston. There’s not much there, but all we need is the post office (to get our resupply box and pairs of shoes for both of us…Yeah!) and a general store where we can eat some town snacks. We are just hopeful that we won’t have to wait too long for the hitch into town. 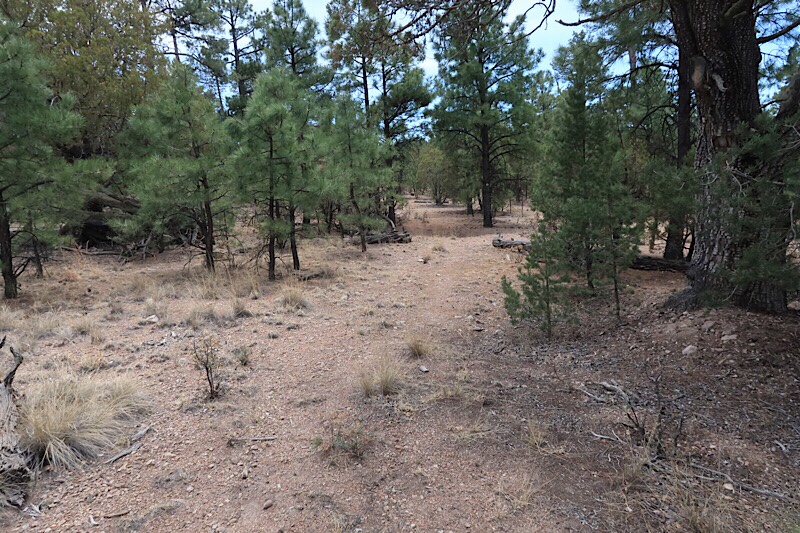 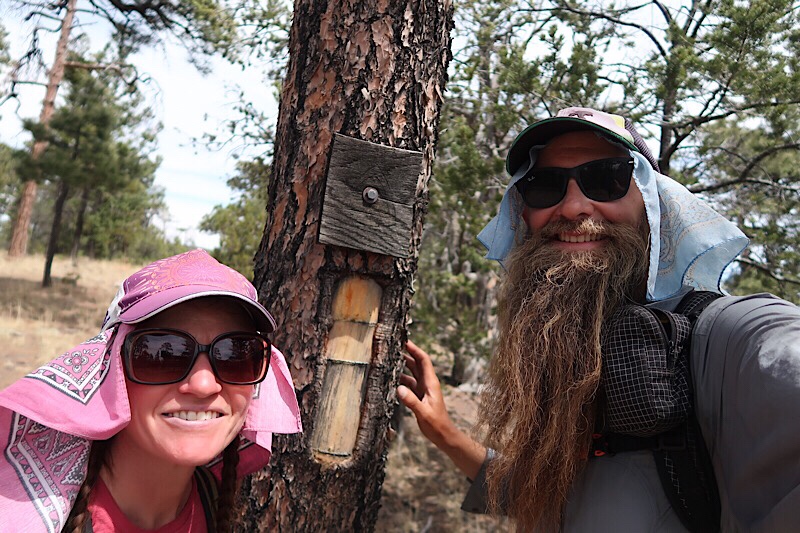 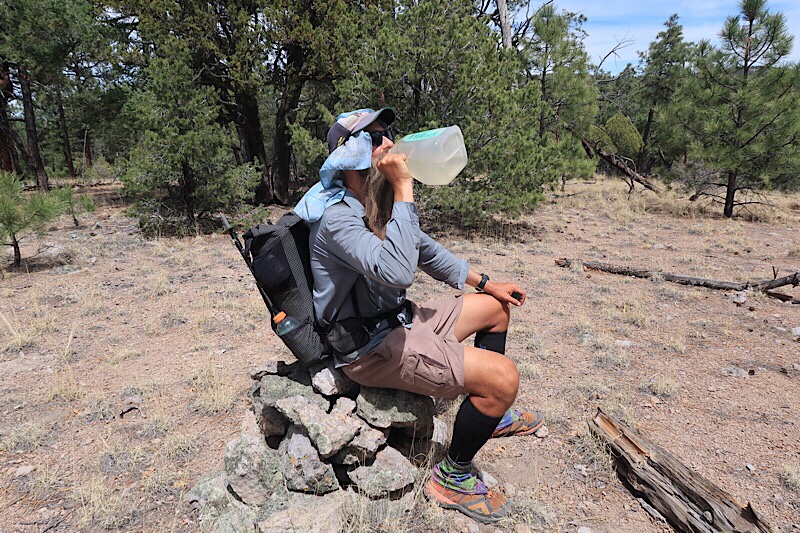 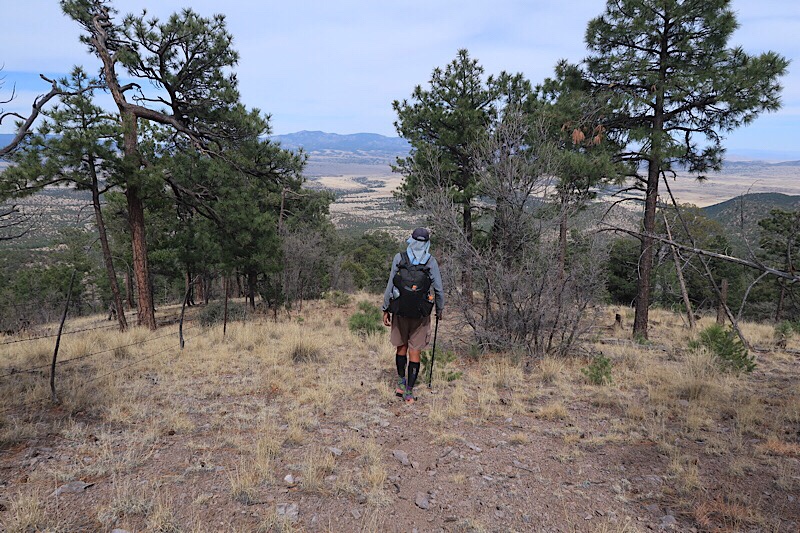 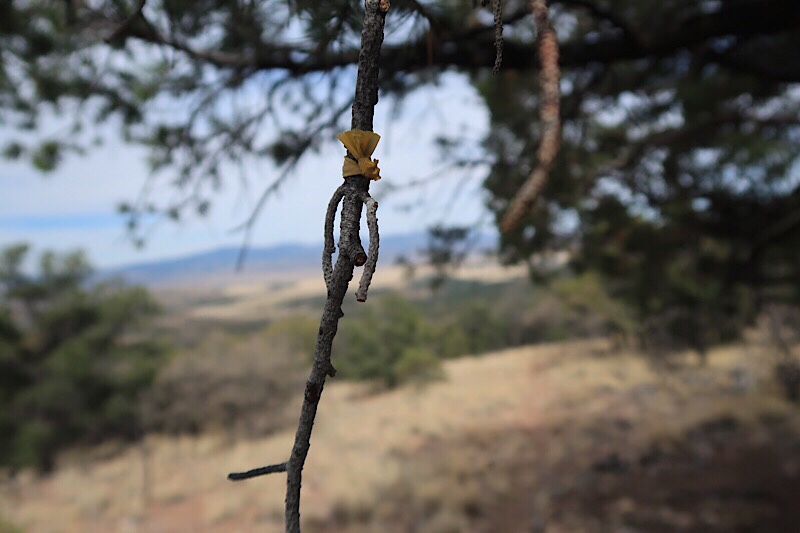 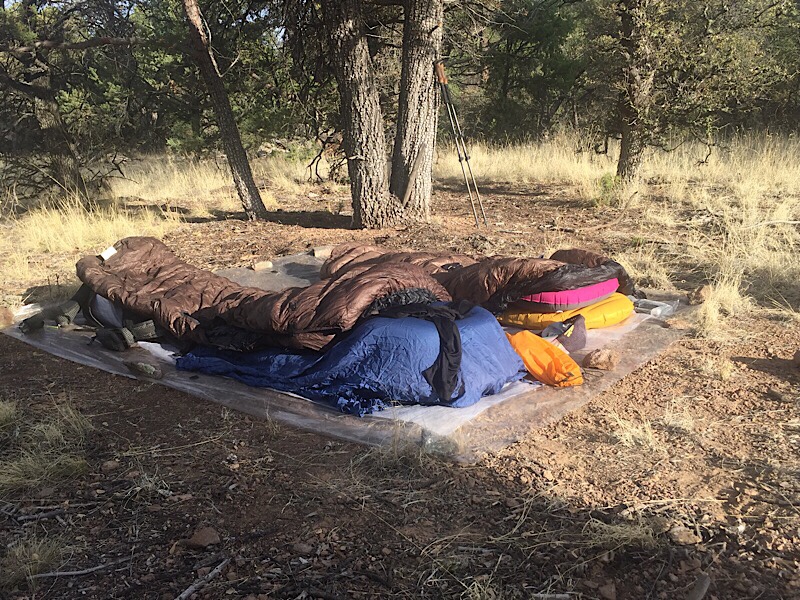