Well, we didn’t get any more precipitation last night. But we can just be thankful for the extra practice of putting up the tarp in less than ideal conditions (that’s our positive spin 🙂). When we went to bed last night, we figured we were in for a mild night, but it got really cold overnight. The temperatures probably dropped so much because we were in a canyon. When we woke up, we were both ready to move in order to warm up.

Within the first ten minutes of walking, we eyed a bear walking towards us on the trail. We stopped to watch him and then he stopped, noticed us and then turned around and trotted off. SweetPea thought he looked big, but Beardoh figured he was medium-sized. He was really black, which is different than the brown and blond ones we’ve seen in the west coast mountains.

We had a few miles left of the canyon and then came to a nice dirt road. The road led to a complex of things (airstrip, helipad, work center, and trough) that were all named Me Own (we also saw it written on a sign as Meown). We weren’t sure what it was, but wondered if maybe there was an Indian tribe with that name in the area. We didn’t see any people around and power had been cut to the work shop, but there was a USFS privy which we were happy to see.

After shedding a few layers of clothes, we headed out on the Me Own Trail. The trail was actually quite rocky and the trees and shrubs in the area were pretty thick. After the last five or so days, we’ve gotten spoiled with trail that isn’t too rocky and with open views. The thick woods didn’t stop Beardoh from seeing an elk from the trail. It was a pretty good morning for us to see our first bear and first elk of the trip.

After a few miles of pretty flat walking on a mesa, the trail switchbacked down to a canyon with a small creek running through it. We knew it was a possibility that we could have around 40 fords of the creek, but we managed to keep our feet dry! The creek was either totally dry at the crossings, or was low enough where we could just rock hop across. We were really glad to have dry feet all day after the last three days of multiple fords.

We walked up the canyon and then turned into another canyon aptly named Burnt Canyon. It had been pretty devastated from a fire in the 1990’s, and is just starting to get some new growth of aspen trees. There was another creek in this canyon and we picked up a bunch of water to hold us for the next 14 miles.

The trail then had us climbing out of the canyon on a trail that was pretty well graded, although it got a bit steep at the end. We came out on the Continental Divide, which we were excited about. The stretch of trail we came to (and that we are concurrent with until tomorrow) is the official route for the CDT. Of course there are many alternate routes on the CDT, and it seems that most folks don’t hike the official trail in this area because of concerns over water availability. Most people take an alternate around this stretch which has them following the Gila River, where there is plenty of water. So, we are curious to see if we meet any CDT hikers on this stretch.

Once we were up on the Divide, we had really nice views off both sides of the ridge. You could see for miles and miles and it just all looked like wilderness…we didn’t see any cities in the distance.

The Divide seems to have dealt with some forest fires as well, so we knew there wasn’t going to be a lot of options for good campsites. We did happen upon a spot which was pretty ideal…no burned trees which could fall on us overnight, a relatively flat-ish spot where we could lay, and a grove of aspen surrounding the spot for some possible wind block. We found the campsite around 5:30pm, and even though it was early, we decided to stop for the day.

We figure it will be a cold night, as we are over 9,000 feet of elevation. We have all of our clothes on and our sleeping quilts clipped into our pads for extra warmth. Hopefully we’ll stay toasty in our bags overnight. 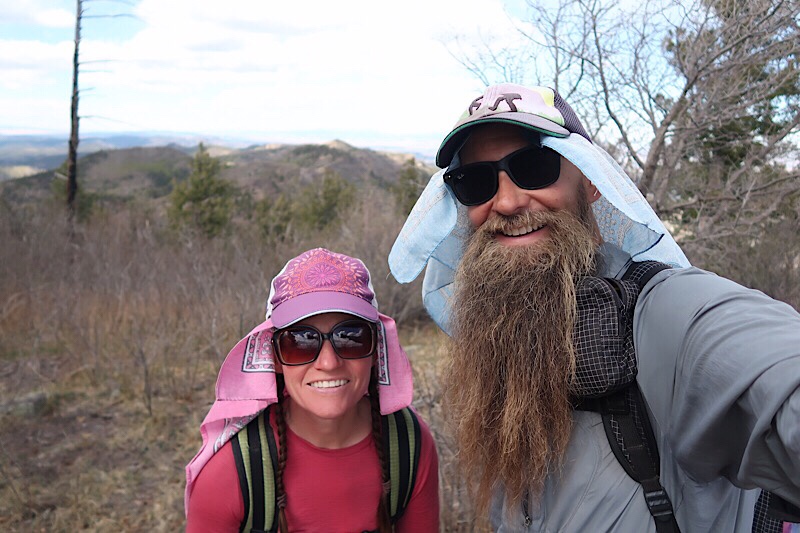 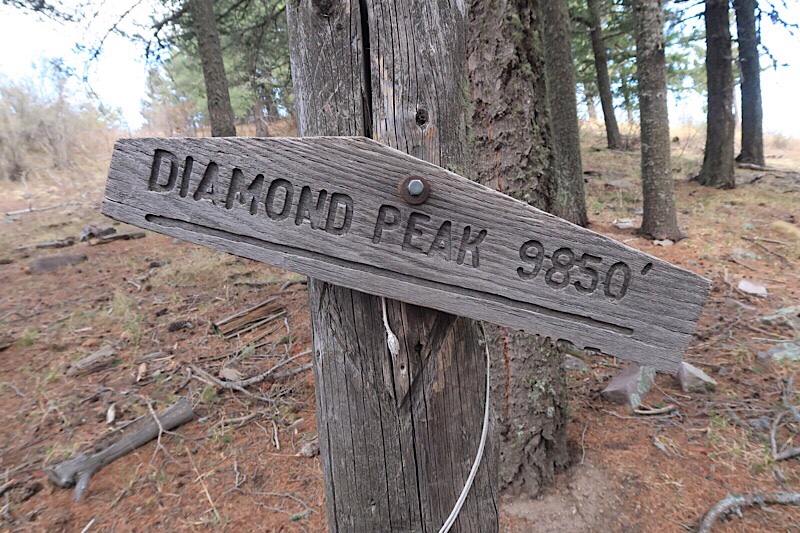 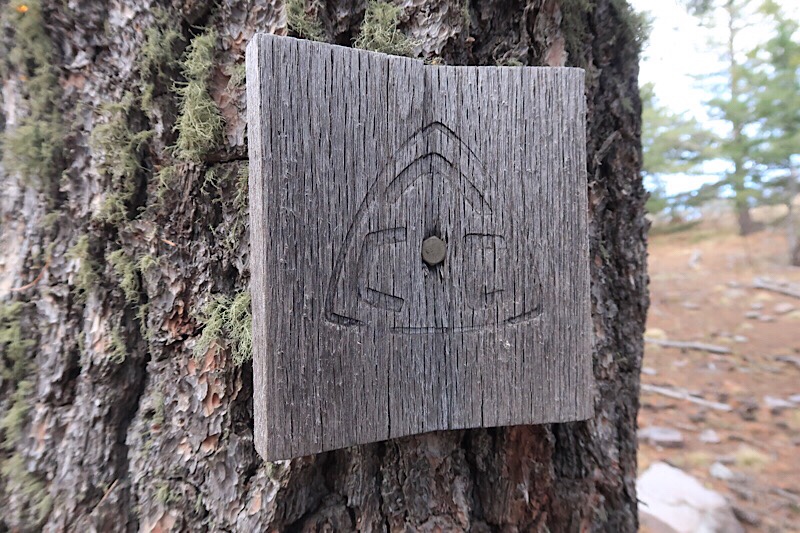 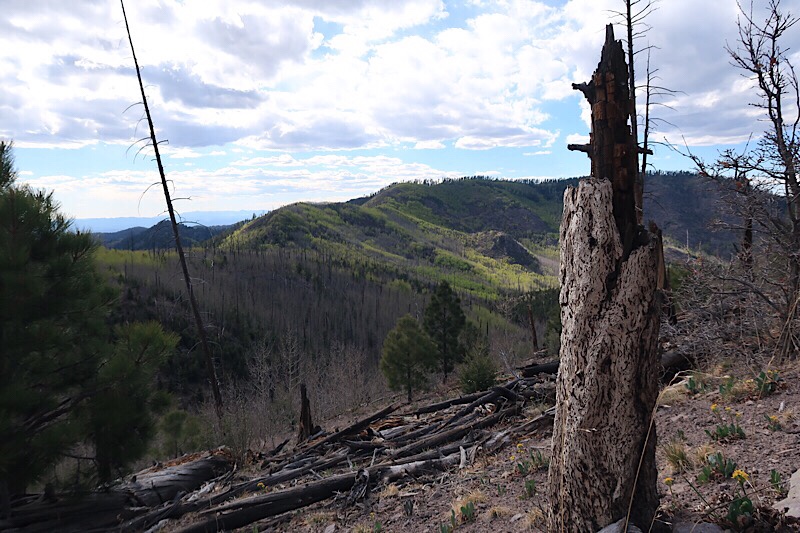 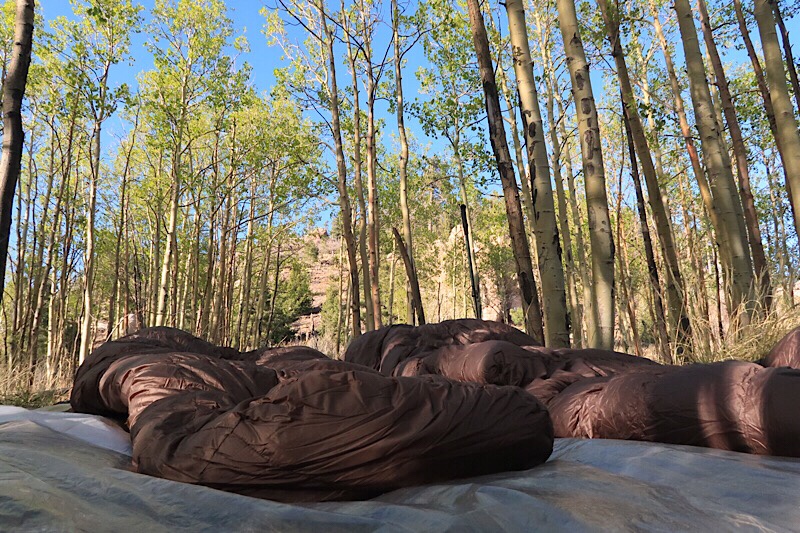