We always seem to sleep poorly when we start a trail.  It’s like we need to get used to the noises and sensations of sleeping outside and this usually takes a few days.  We figured it would be amplified on this trail, since we are sleeping on the ground…something we don’t often do.  Given all that, last night was still a terrible night of sleep.  SweetPea is not even sure she slept at all…if felt like she just layed awake all night.  Beardoh had to blow up his neoair four times last night (and this was the first night of use for the pad!).  Of course we were both awake before our alarm went off at 5:30am, so it felt a little easier to get going.

We were packed and ready to go in about a half hour.  We knew that today was going to have a lot of climbing, and we wanted to get as much done in the cool morning air as possible, so we went for the early start.  It was really nice walking in the morning light…one of our favorite walking times.

The miles came really slow today.  SweetPea’s right knee was bothering when we started out and got progressively worse throughout the day.  She’s not really sure what happened with it, but bending it is quite painful…not very helpful when you’re hiking up and down mountains.

We got onto a different trail this morning, which was a bit rougher and a bit more vague than the other trails.  We had to keep more of an eye out for cairns along the route.  It was decently marked, but it doesn’t seem that the Forest Service has been the ones to mark the trail.  Instead, it seems that hikers make the cairns to help out future hikers of the trail.

In the morning, we came upon a spring that had lots of really nice water.  We were surprised to see it, since we were carrying water for a 27 stretch, and this was only 10 miles into it.  We both took one liter from the spring, thinking it would allow us not to have to reach the next water source today.  Turns out that we probably should have gotten more, since we drank a lot in the morning as the temperatures climbed.

We had a nice break in a shady spot near a pretty cool cave.  We ended up taking multiple breaks in the morning and had only managed to hike 9 miles by lunch.  It is definitely a different mind frame that we need to get into so that the low miles don’t bother us mentally.  We knew this was going to be a harder trail, so we had planned for low miles.

Late in the morning we turned onto Roger’s Canyon Trail.  For our lunch spot, we made it to the site of some 700 year old cliff dwellings.  We sat across the wash from them and ate our lunch, and then Beardoh climbed up the cliff and explored around the dwellings a bit.  It is pretty amazing to see something like that in the middle of nowhere, that is so old and still at least partially in tact.

After lunch we continued our gentle ascent to where we met up with the Arizona Trail.  It was nice to be back on a trail that we both really love.  We had a few more miles of climbing, and saw even more pools of water down from the trail.  Beardoh went down to the water and got enough for both of us to have plenty until we reach to next water source tomorrow morning.  We were glad to find the water, as we were both pretty low on water leaving lunch.

We finally got to the top of the climb, which happened to be where we had camped when hiking the AZT.  We stopped for a break and then decided to head down the steep, switchbacked decent into the canyon.  It was pretty slow going with SweetPea’s knee.

Finally we made it to the canyon and came across some cows grazing in the canyon.  They have lots of room to roam, so hopefully they won’t come to our campsite and bother us.

We were both pretty beat by the time we stopped for the day.  We have a nice breeze on us tonight, so hopefully it will make for nice sleeping temperatures.

It feels like the trail took its toll on us today.  SweetPea’s knee is pretty concerning, and Beardoh is dealing with pain in one of his arches and the ankle he twisted yesterday has continued to be of some trouble.  Not really the physical shape you want to be in at the end of just the second day on the trail. 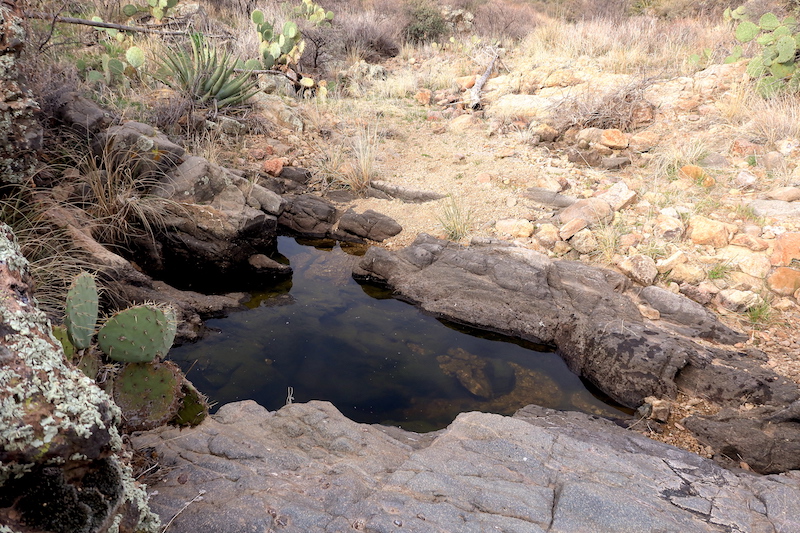 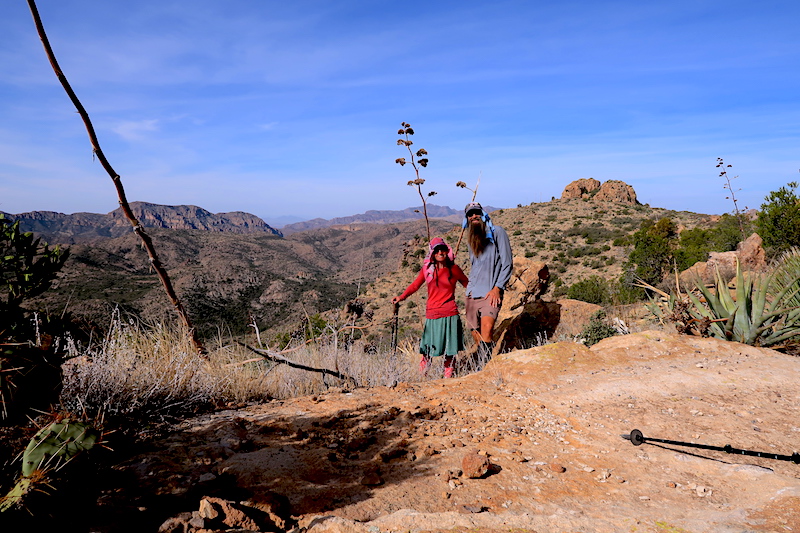 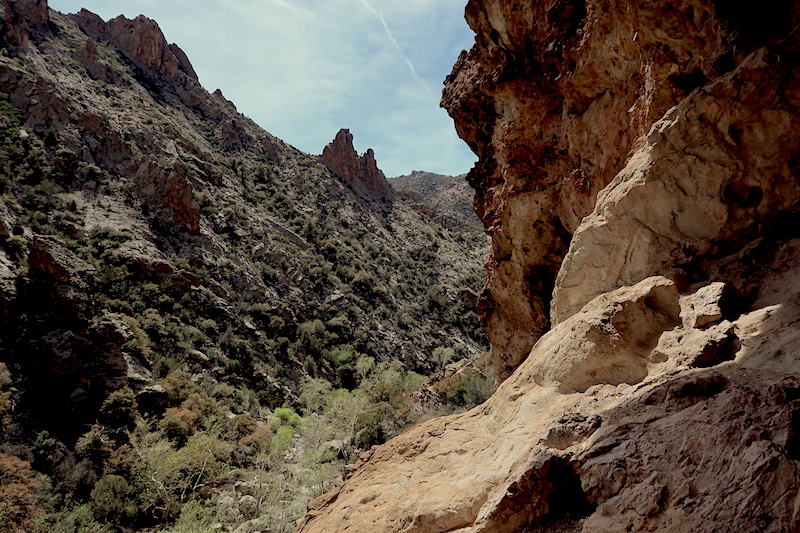 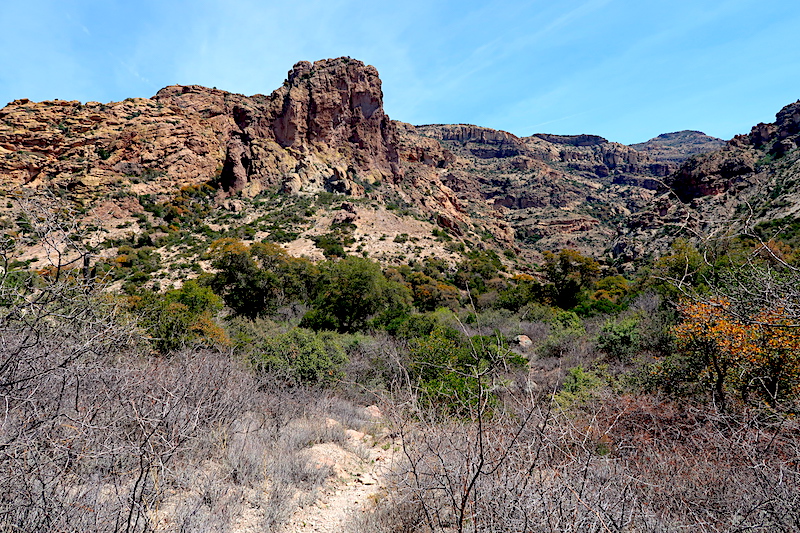 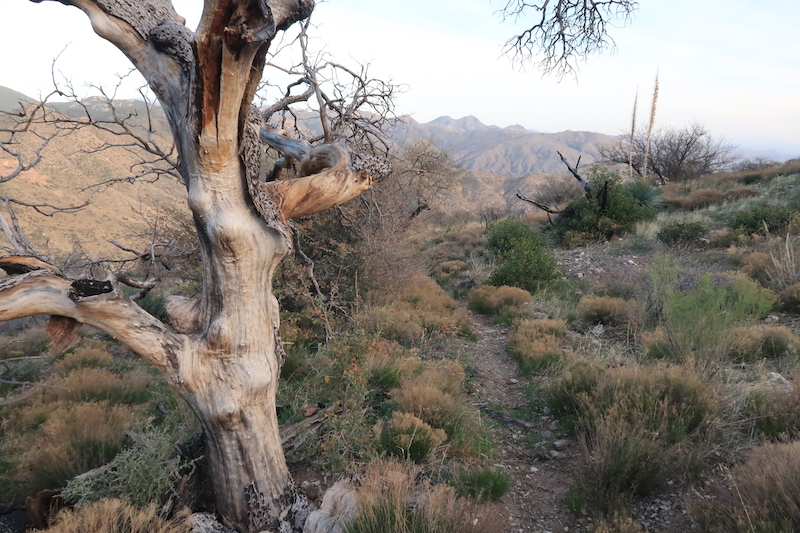 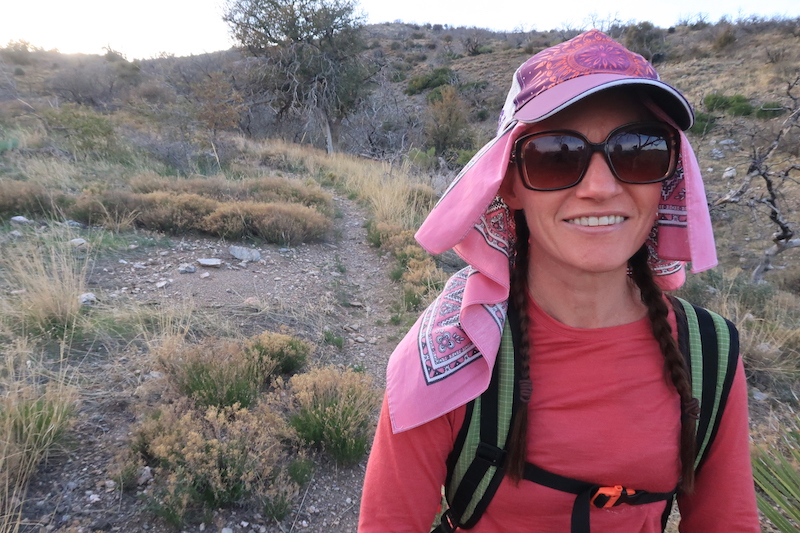 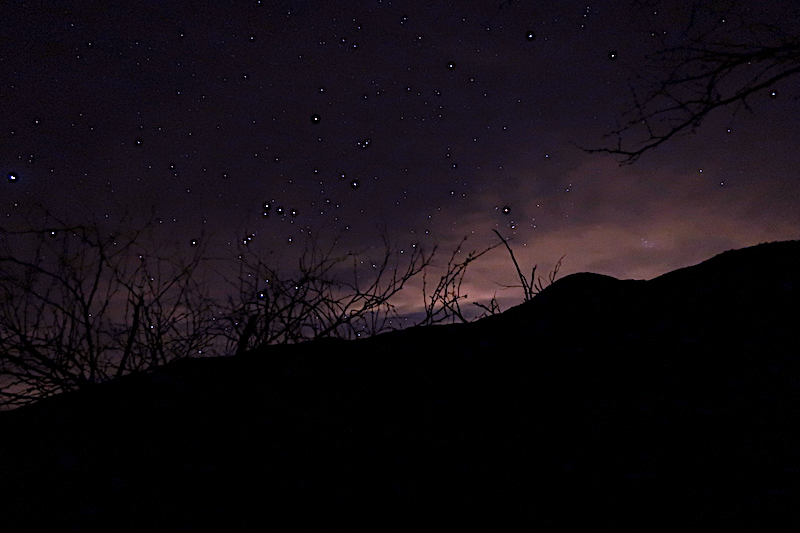