Holy cow are we exhausted!

We got up at 5:15am and were on the trail within half an hour. We walked for less than five minutes before we descended to a meadow that was really cold. We had to stop and get out our down jackets and gloves before continuing on.

About half an hour in, we came to a creek we needed to ford. We didn’t want to have wet shoes so early, so we stopped to take off our shoes and socks. Even though the creek was probably only ten steps across, our feet hurt so bad from the frigid water. Even once we started walking again, it felt like there were pins in our feet until they finally started to warm up.

We realized this morning that the trails on the National Geographic map we have and the GAIA gps app we have don’t completely match up. It caused some confusion about whether we had missed our only trail junction for the day. The GAIA showed we had missed it, but the NatGeo map showed it was coming up soon. We decided to go a bit further and luckily found the junction. There was even a sign there, albeit in pretty rough shape.

We continued on towards the Banff NP border. We had a gradual climb up to Whiterabbit Pass. The last four miles or so, the trail was pretty overgrown with bushes that could be waist-high or even shoulder-high. It was pretty tiring pushing through the bushes for so long.

Whiterabbit Pass denotes the boundary of the Banff NP. We are sad to leave Banff as we have been hiking in it for over a week now and truly love it. It is definitely one of the top two most beautiful places we have ever been to. We really hope to be able to come back in the future to do more hiking here.

Once we left the NP, the trail was kind of a mixed bag. There was quite a bit of decent horse trail, but at times it would just disappear and it would take us a bit to find our way back onto the trail.

When we got close to the Ram River, we could really see and smell the smoke from the Siffleur Wilderness fire. The sky was a hazy orange-ish brown and all the mountains were obscured by the smoke. Breathing the smoke all afternoon bothered our throats as well. Hopefully the wind will change direction soon and blow the smoke away from us.

our feet dry, so we took off our shoes and socks again. Beardoh decided he would just toss his shoes to the other side, but didn’t quite make it, so he ended up running into the river to grab his shoes before they were swept away by the river. It was a close call, but it could have been bad! (He will not be pulling that move again)

In the late afternoon, we came to the Whiterabbit Creek which seems to have suffered a lot of flood damage in the last few years. The nice trail we had been walking down disappeared and we haven’t been able to find the trail again…it seems that the flood must have washed it away. We ended up just walking the rocky riverbed alongside the creek. We kept going back and forth over the creek at least ten times, and the thought of dry shoes was definitely out the window. It was hard on our feet to walk on the rocks with wet and cold feet, but surely it will be worse tomorrow morning when the temperatures will be much colder. Our estimation is that we have roughly 10ish miles, as the crow flies of riverbed walking if we don’t find the trail. The trail appears on the NatGeo map, but doesn’t on any of our background map layers in the GPS.

We found a place to camp on the side of the river. Tonight is our second night in a row of random camping. It is nice to be able to just stop when we want to at the end of the day. All the other nights in Banff NP were spent at designated campsites. Those definitely had some advantages such as a privy, bear cables for hanging our food, and proximity to a water source so we could do laundry in the evening.

Once we hung our hammocks, we both just sat in them and sighed a lot. It was a really tiring day, but we made good mileage, and we should be able to get ourselves to the road by the end of the day tomorrow. We had each brought an extra day of food since we weren’t sure if we would encounter conditions which would really slow us down. Luckily we won’t need the extra day to finish this section, and we can have a rest day once we arrive at The Crossing Resort.

Beardoh put on some tunes this evening as we were setting up. It was a good way to lighten the mood since we were both feeling pretty wiped out. 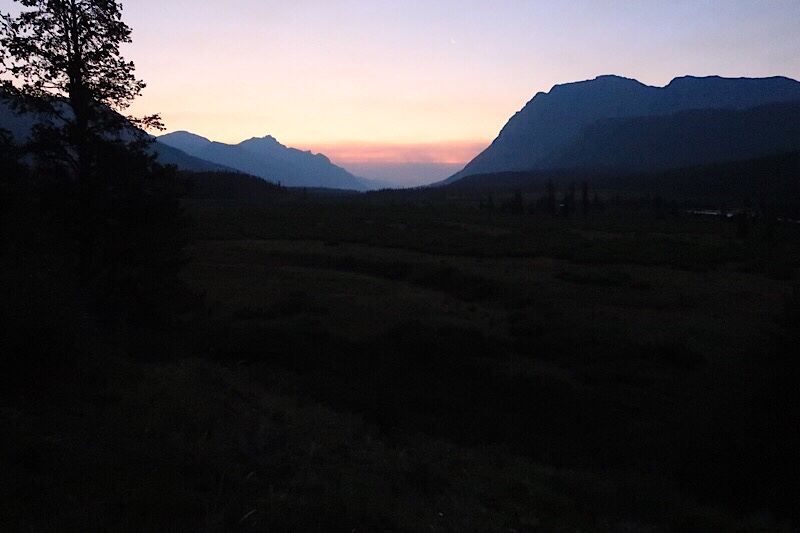 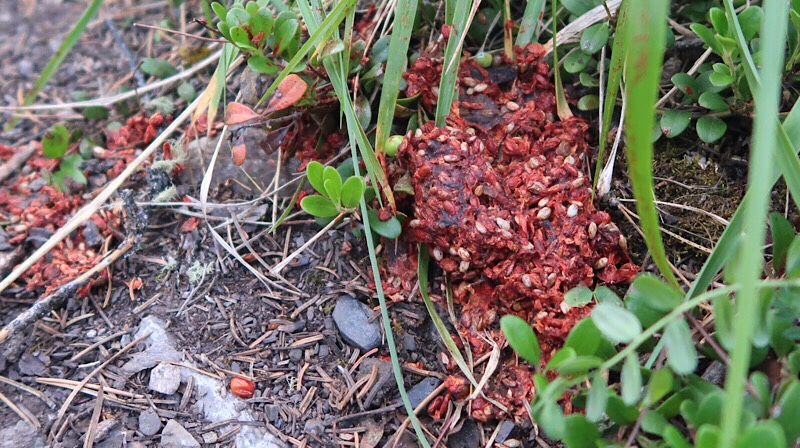 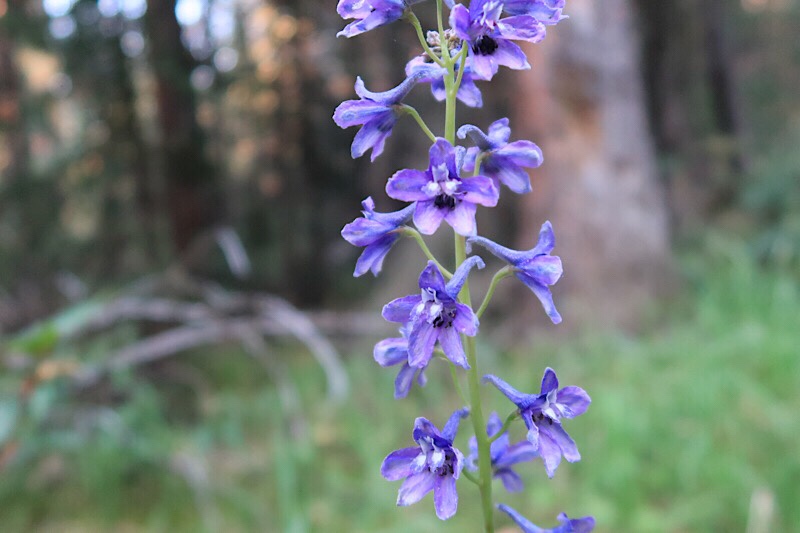 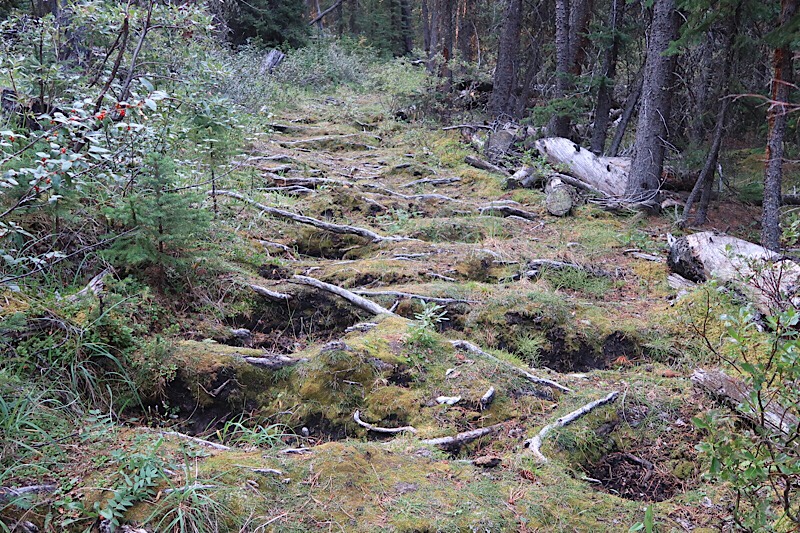 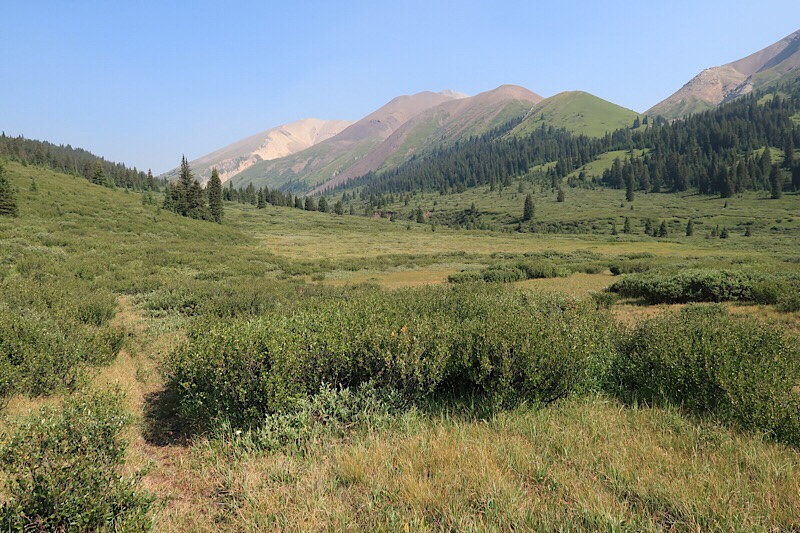 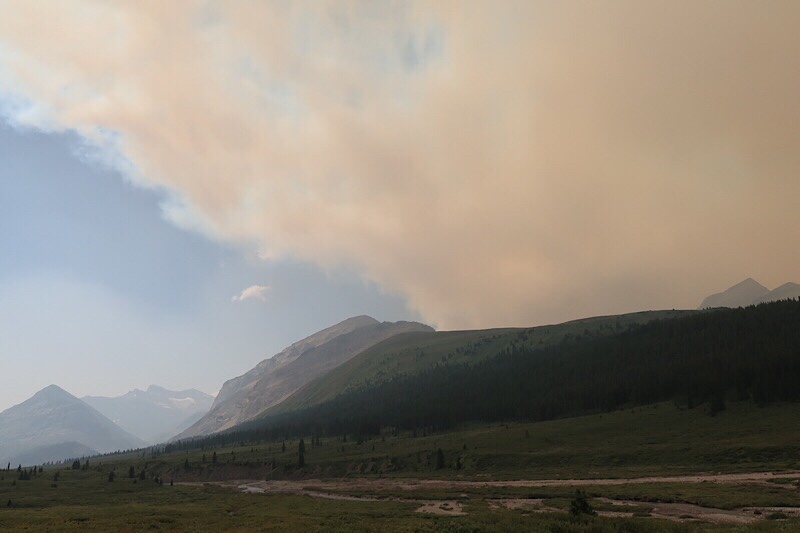 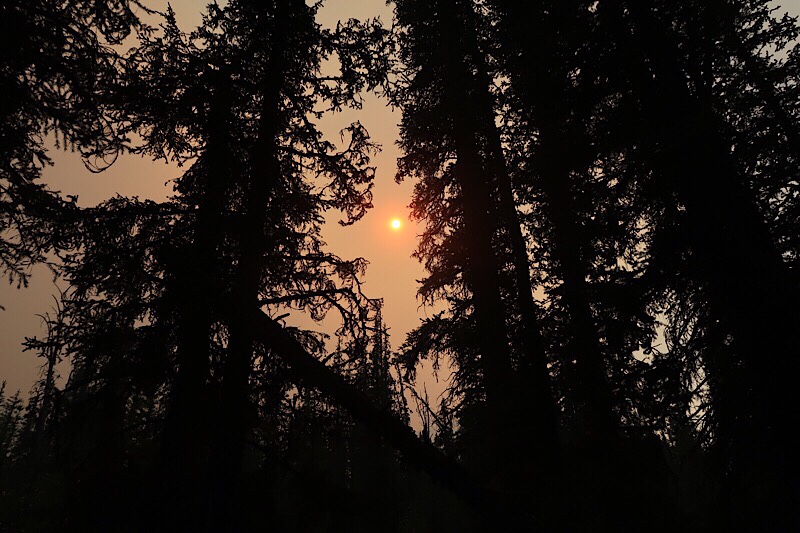 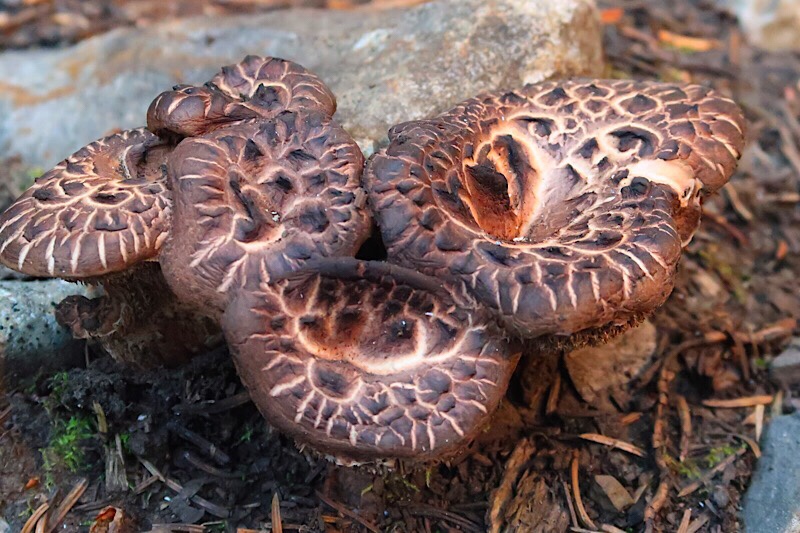 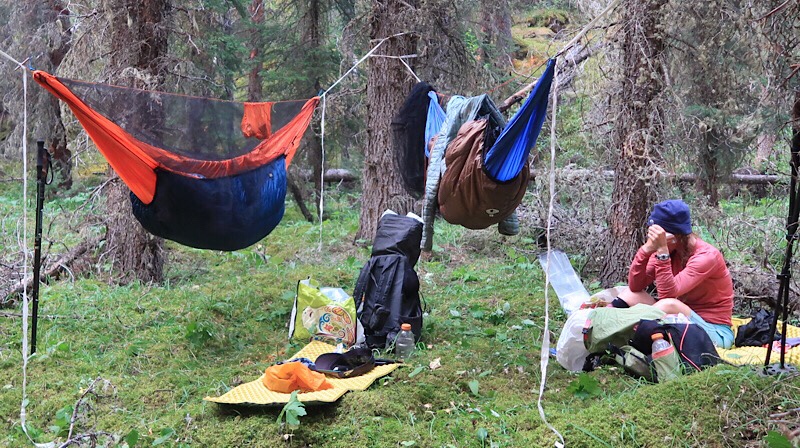