Today felt like a really long day. Things that happened just this morning, already feel like they happened several days ago.

We slept surprisingly well given all the noise from the Trans-Canada Highway that we hammocked near. We packed up before 8am and walked to a convenience store for hot drinks and snacks before the Visitor Center opened.

We hung out there, charging our phones and doing a bit of laundry in the sinks before the post office opened. One of the rangers, Courtney, came over and talked with us about our hike. She is interested in doing a long trail, and is hoping to hike the Te Aurora trail in her home country of New Zealand this winter. It was fun to chat with her about the other hikers she has met and her work with Parks Canada.

When we went to the post office, we met another GDT hiker. His name is Bruno and he is from France. He was really funny and we joked about the really big box of food he picked up. He was planning for twelve days to Jasper, so that is why he had so much more than us…our box only had four days of food to Saskatchewan Crossing.

After we got our food all packed in, we headed back to the highway to hitch back to Lake Louise so we could continue on our alternate. The highway was a tricky spot to hitch, as cars were flying by. We figured our only luck was with cars just getting on from Field, but none pulled over. We waited for about an hour before we got an awesome hitch.

It was a group of friends/family in a minivan (we never expect minivans to stop for us) who had immigrated from Eritrea. They were really friendly and gave us sodas and cookies. We got to talking, and it turned out that several of the guys had learned Swahili while in a refuge camp in Uganda. So we had great fun trying to recall our Swahili and converse a bit. We were all surprised and excited that we shared the Swahili language. It was just such a random and awesome experience. The last time we randomly bumped into someone who spoke Swahili was probably 2004.

When they dropped us off in Lake Louise, we walked for a bit until we got to the trailhead we had planned to be the start of the next leg of our alternate. When we got there, it was signed as being closed due to construction on a reservoir along the trail. We were really annoyed since we had presented our route to several rangers over the past few days and none had mentioned the trail closure.

So now we had to come up with Plan D. Our options were to go back to the trailhead we had come from yesterday and start up the long climb in the middle of the day…that did not sound appealing, especially recovering many miles we had already walked in a park full of trails. Or we could hitch up about 20 miles north to another trail which could access the route we wanted to take. It would cut out about seven miles, which wasn’t a bad thing since we had already lost so much time today.

So we went for the shorter trail. That meant that we needed to walk down the highway for just over half a mile until the highway we needed split off from the Trans-Canada Highway. Once we got to a spot that we figured would be good for hitching, we waited quite awhile for a hitch. In fact, we had pretty much given up and just decided to walk back into Lake Louise and call it a day. Then SweetPea saw a car coming by, put out her thumb without much conviction and the car pulled over for us!

It can be pretty demoralizing to wait so long for a car to give us a ride. Especially when we are getting passed by at least a hundred cars (probably total of 300+ today). But, our mood can change in an instant when someone pulls over to help us out.

The driver, Ryan, was on his way back home to Jasper and kept us pretty entertained with stories of his brushes with the law. It was very different from our hitch earlier in the day!

But, finally we got to the trailhead for Mosquito Creek Trail! We sat down to eat a bit and finally got started around 1:45pm. We had figured we would be starting about three hours earlier, but it was good to get back out in the woods.

The trail this afternoon was great. The first part of the trail wound through a fairytale-like forest with a crystal-clear creek flowing by. The trail was in great shape and we made good time.

After four miles or so, we started our gradual climb towards North Molar Pass. The landscape changed, first to wild-open meadows and then to a rocky, almost moon-like, landscape. It was really cool scenery and we enjoyed the climb. The pass was rocky, but there was a decent path through the rocks making it a pleasant walk to the pass. Surely if we hadn’t been in Banff NP, the pass would have been a “chose your own adventure” route to the top and back down. It was really nice to have the path. We noted when the climb started that we had about a thousand foot elevation gain in just over a mile, but the grade was so perfect that the climb cane easy.

As we descended from the pass, there were no trees around and we started to wonder if we would be able to hang our hammocks at the Fish Lake campsite we were aiming for. Luckily, as the trail turned a corner, the forest reappeared and it looked like we wouldn’t have a problem.

The campsite tonight is picture-perfect. A beautiful blue lake, right up against a big rocky mountain. We went down to the lake to wash up and do laundry, and it was such a peaceful scene. Even though today felt a bit crazy and disjointed, we were really glad to be here tonight in a truly world class camping spot. 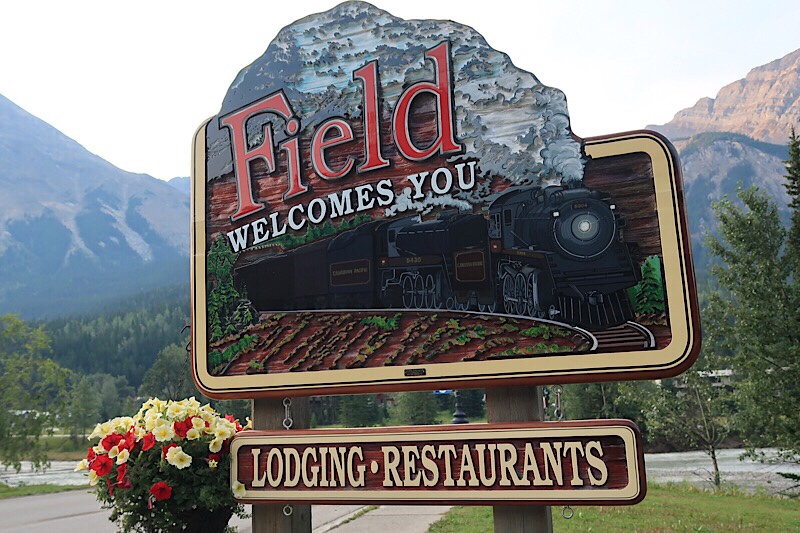 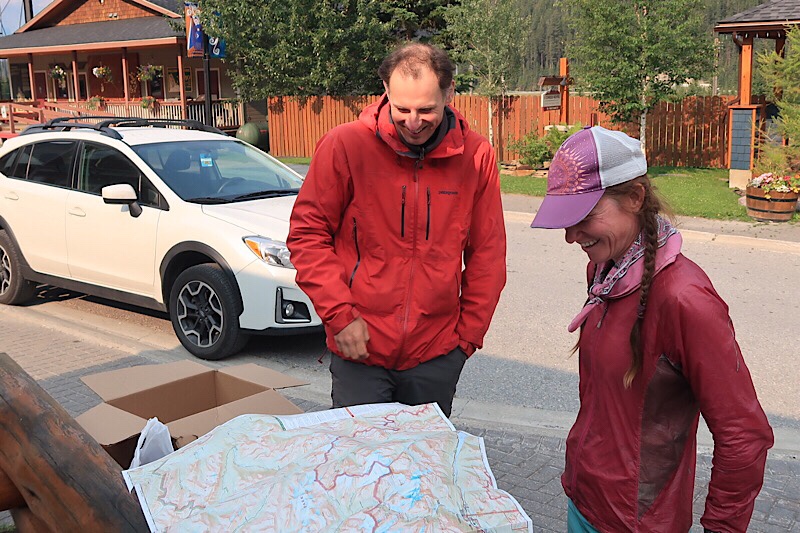 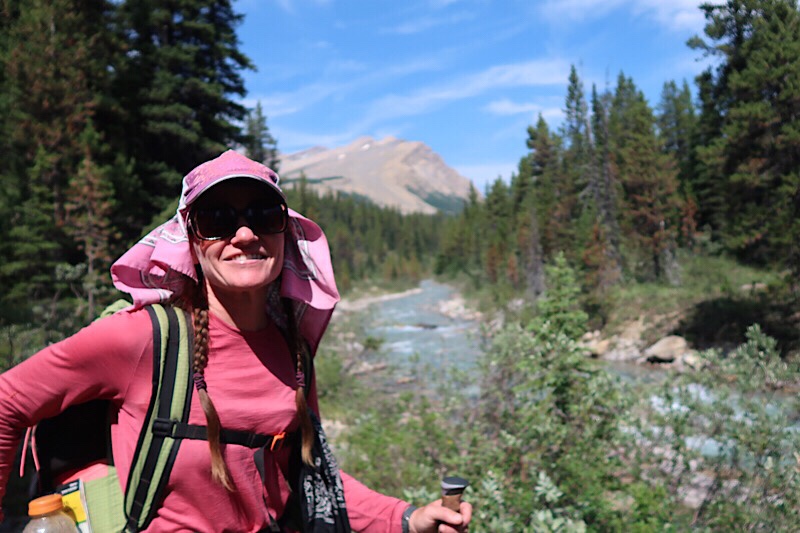 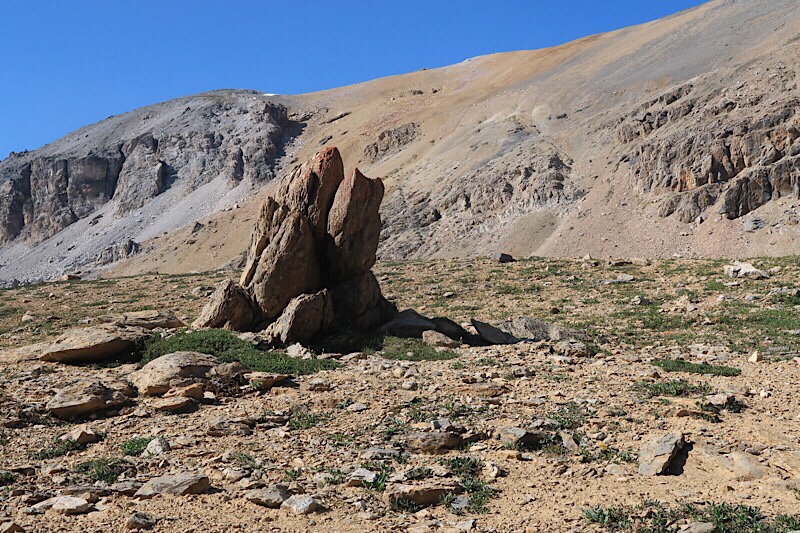 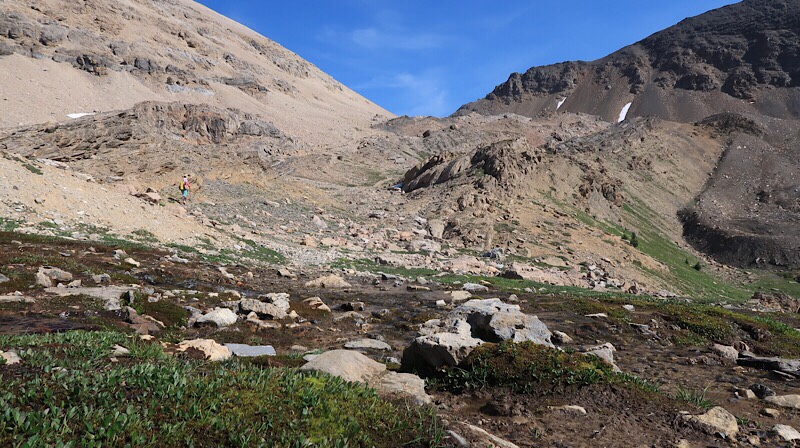 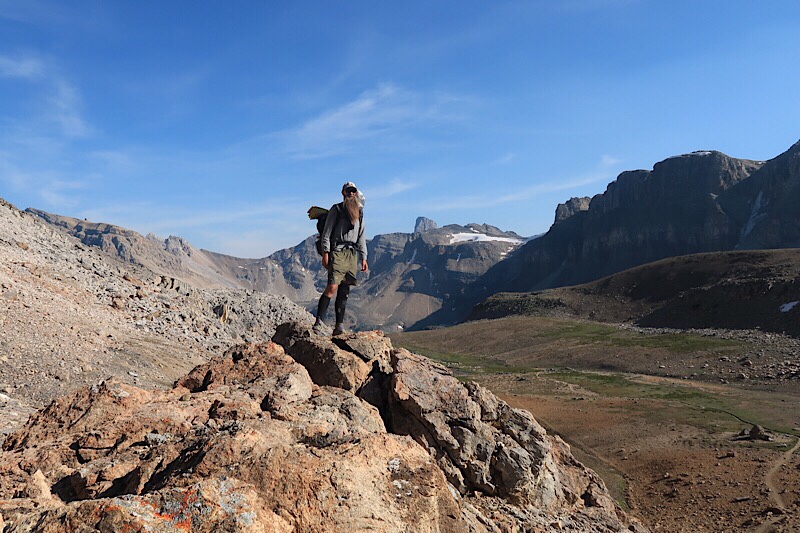 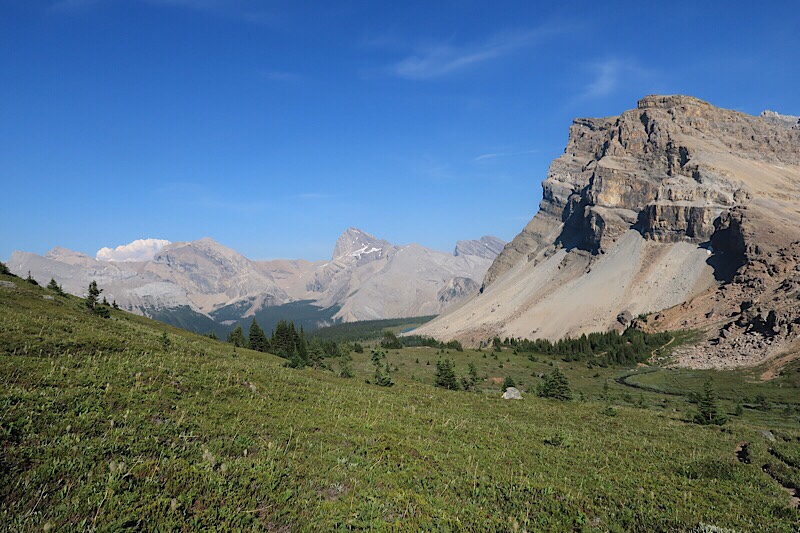 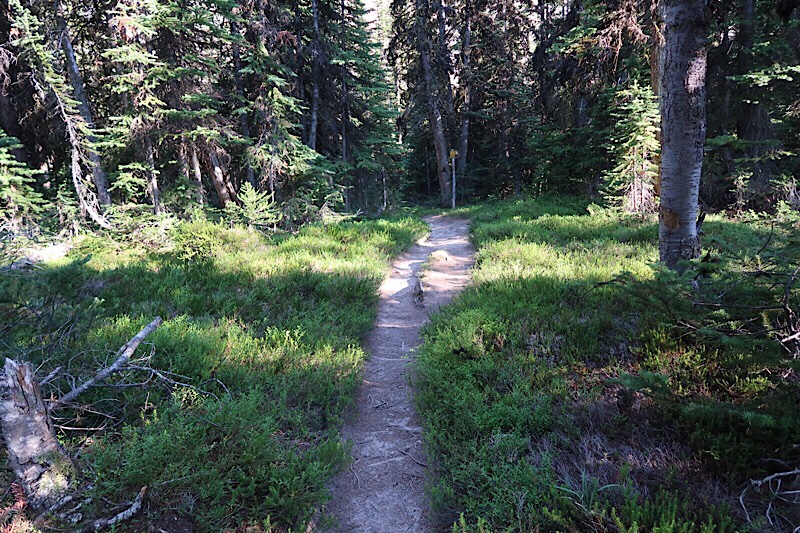