We ended up staying in Banff an extra day because of the fire closure. The evening before we were set to head out, we saw that more miles of the GDT had been closed due to the wildfire and that the GDTA has no detour to offer for getting around the closure. So, we had to come up with a Plan C.

We had dinner that night with two other GDT hikers…Julian (who we had met twice already) and his friend, Fartbag (who, it turns out, we having been hiking around on the same trails for two years and had never met before – PCT, CT, GET and now GDT). We had a really good time hanging out with them, and once we heard their plan for getting around the fire closure, we started to get a better idea of the possibilities.

We didn’t really want to skip up to the next town of Field, since that would put us ahead of our campsite reservation schedule – and have us missing a lot of Banff NP. Also, we had heard that the trail north of Field is one big mess of downed trees and overgrown and abandoned roads…definitely not a highlight of the trail. That made us think of trying to create a longer alternate that could bypass not only the fire closure, but also the bad section of trail.

We looked over the hiking maps of Banff NP that Leslie had at her house. We also went down to the Parks Canada office the next day to get some help with finding an alternate route. We now have a route that we are pretty excited about. It will keep us off of the true GDT for 7+ days. Most of it seems pretty good, albeit on some of the most remote sections in the Banff NP. The final 15-20 miles of the route is a bit unknown. We aren’t sure how maintained or easily navigable that section will be. Even though it could be a mess, it is still better than the GDT which has at least 50 miles of mess. Our friend Leslie has hiked much of this route and suggested it, so we are pretty optimistic.

So, we bought several National Geographic maps of the park to cover the area we plan to hike. It will be broken into two sections, as we will get off at Lake Louise after about 44 miles to hitch to Field and pick up our resupply box before returning to Lake Louise to continue our alternate. We have to keep a pretty slow pace over the next few days, because our package is at the post office and Monday is a holiday, so it will be closed.

Banff was a nice relaxing stop for us along the trail. It was so nice to stay at Leslie’s condo with Anthony. We hung out some with him and his boyfriend, Levi. We went into the hot tub, we read and watched Netflix, and just generally lounged around.

We also spent time at every pharmacy in town looking for just the right knee brace for Beardoh. At the final pharmacy, they suggested he go upstairs to the physical therapist to get his opinion about a brace. It was so nice that the therapist just came out and talked with Beardoh and gave him some advice. So, Beardoh got the brace and also iced his knee and used a foam roller while we were in town. He used the brace all day on the trail today, and his knee was feeling better. Hopefully this will get rid (or at least mediate) of some of the pain he was feeling before.

It was great to get back out on the trail today. Anthony and Levi drove us to the trailhead this morning. We started walking just after 9am. The trail followed a creek for the first nine miles or so. The trail was really wide and very well-maintained…it was such nice walking.

We saw several other folks out on the trail today, including a group of three friends from LaCrosse, Wisconsin! They had come here to hike after one of them had seen a photo of the Banff area and decided they needed to come here and hike. We love hearing that ‘go for it’ attitude- it is really encouraging to meet people like that.

We went over a pretty mild pass in the afternoon. It had been grey all day with bit of sprinkles here and there…never enough to put on our ponchos. Once we were on the pass, it turned into a light rain, so we put our ponchos on for about thirty minutes. It was good that it didn’t rain hard, but we got to enjoy the cooler temps, especially after the heat earlier this week. The rain did make the rocks and roots in the trail rather slick, so we had to be mindful of where we were stepping on the way down.

Arriving at camp shortly before 6pm, we were happy to find an empty campsite. We did our laundry down at the river and headed to our hammocks before 7pm. The bugs aren’t bad this evening (although they were terrible during the day), but still we are ready to be laying in our hammocks. 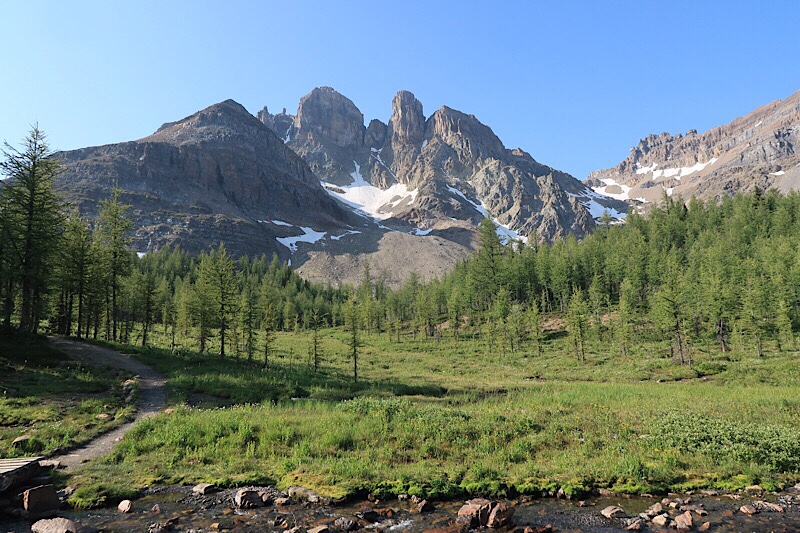 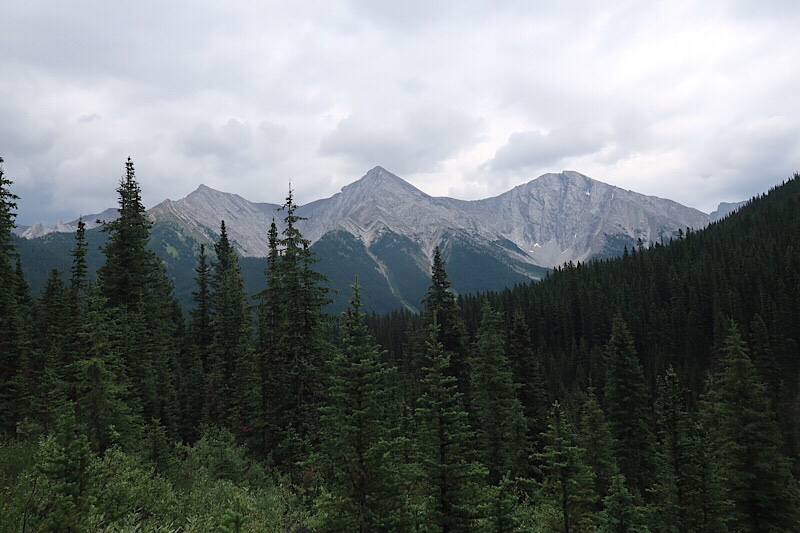 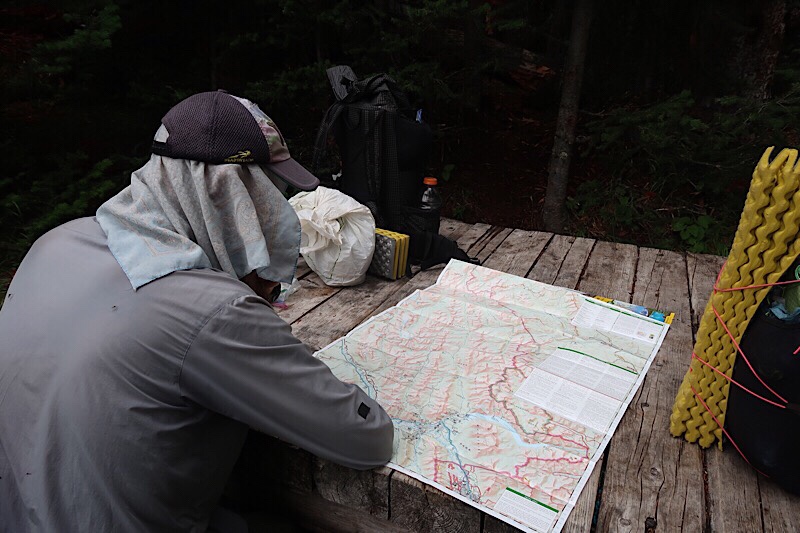 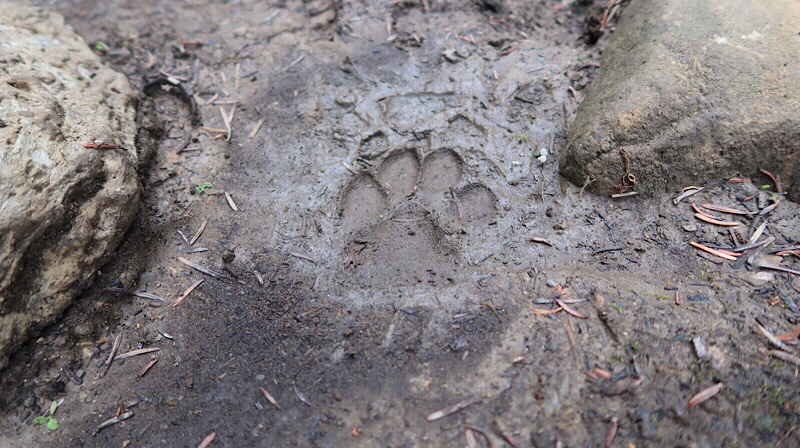 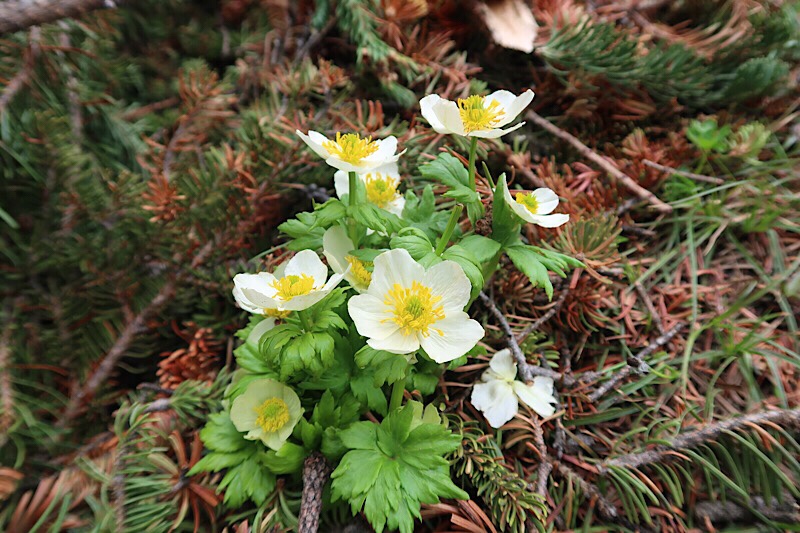 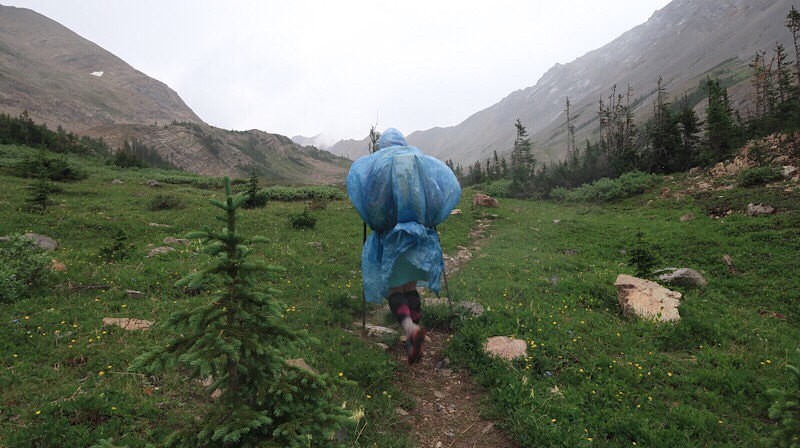 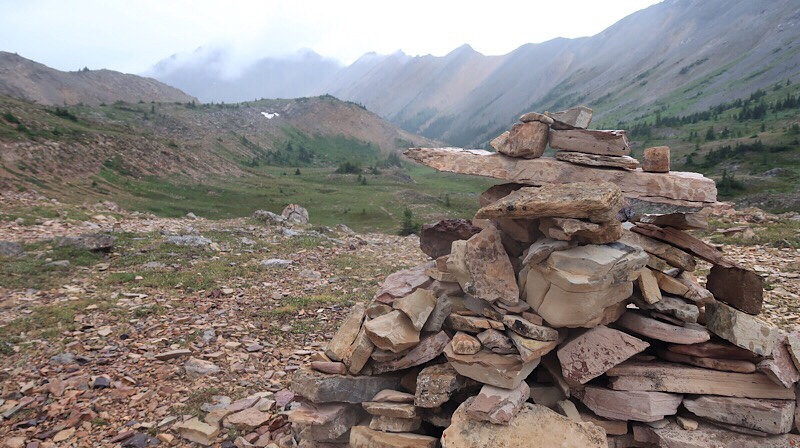 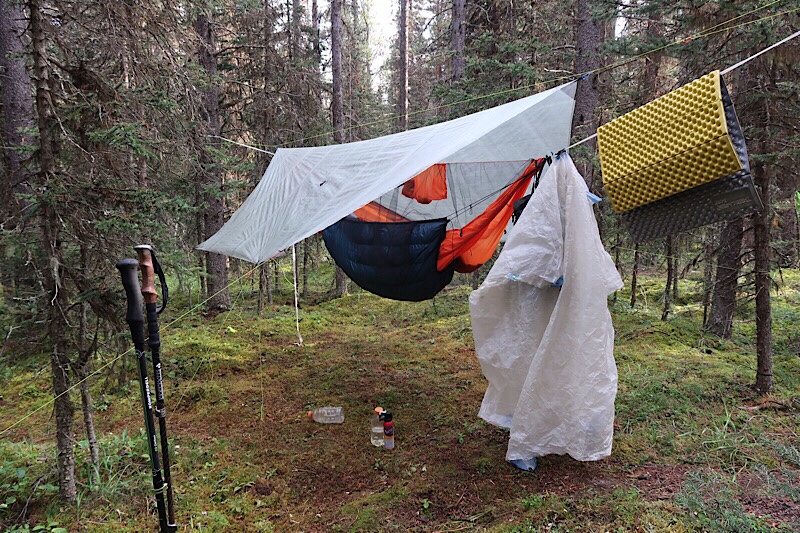