You are here: Home / Grand Enchantment Trail 2018 / GET Day 16: The Safford Morenci Trail

We woke up to a beautiful sunrise this morning…probably the best sunrise of the trip. And definitely a sign of what the day had in store for us. Since we had slept at just over 4,000 feet, the temperature had been really nice for sleeping.

We got started around 5:45am, and had two more miles of dirt road to start the day before we got to the beginning of the Safford Morenci Trail. The scenery along the road was really great and the morning light just made it all better.

When we got to the Safford Morenci Trail, there was a register for hikers to sign before starting on the trail. We could see from the register that the nearest GET hiker in front of us signed the register two days ago. This trail has been so different in that once we diverged from the AZT, we have had the trail pretty much to ourselves. It really changes the focus of a hike from being a social experience to just being about the hiking.

The Safford Morenci Trail has been developed by the BLM. This route used to be a commercial route in the olden times, and now the BLM has been working to improve the route and build trail for hikers and horse folk to use.

The trail quality really varied throughout the day. There were parts where trail was built along washes so we could avoid walking in the rocks, which was great. Other parts of the trail were really rocky, overgrown and way too steep.

The scenery all day was spectacular…probably one of the nicest days so far on the trail. We walked through several slot canyons which were really cool. At some points it was so narrow you could touch both walls if you stretched out your arms. The different types of rock that made up the canyon walls were really cool too. There were several different types and colors along the way.

We saw our second dead fox of the trip. Both have been in washes and likely dead for awhile. They have both been pretty dried out, while their skeleton (and some fur) are still intact…pretty weird finds.

We got to a nice stream in late morning and stopped to do laundry and have a snack. It was a really pleasant spot with big trees giving a lot of shade.

The first part of the afternoon was largely spent climbing up to a saddle. Along the way, we passed a spot, from where you can see a cave in a nearby cliff where the story goes that a cow wrangler named Toppey lived. It must be true, since the map actually marks the spot as “Toppey’s Cave.”

The final mile and a half to the saddle were really tough. Even though the trail here is only a few years old, it is pretty rough, rocky and steep. We made our way up pretty slowly as it was also getting hot and we didn’t have as much water with as we wanted to drink.

The views along the way up were spectacular. The map even marked the saddle (our high point) as having “spectacular views” which was very accurate. We sat down at the saddle for a bit to rest after the arduous climb.

We headed down the other side and the trail started off just as rough as the trail we had taken up. It was rather slow going down with the steep trail and loose rocks. It started to get a bit better after almost a mile, and then it was easy walking, but only because it wasn’t as steep…it was still super rocky.

We were pretty thirsty when we got to our final water source for the day. It had gotten pretty hot today, and we had only taken two liters each from our first water source eight miles earlier. The spring we got to had a big tank with really clear water. Beardoh had to climb a ladder to get to the opening, but luckily the water was near the top of the opening, so it was no problem.

We had hoped to just camp at the eastern entrance to the Safford Morenci Trail, but there weren’t any good places (level, or without rocks), so we continued on for another half mile. We’re camped near a dry stock pond with nice views of some bluffs in the distance. Since the cow tank is dry, we hope that means we won’t be visited by any cows during the night.

Tomorrow we will take an alternate which will bring us to a road where we should be able to hitch into the town of Morenci. We only have seven miles to hike before we can hitch, so hopefully we can get into town early. We haven’t decided if we will stay in town tomorrow night, or just come back to the trail. We’ll probably just see how things play out tomorrow before deciding. 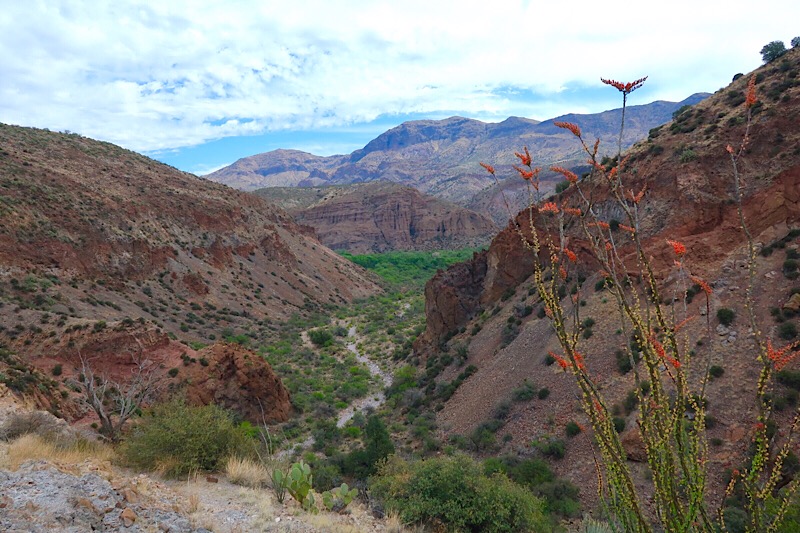 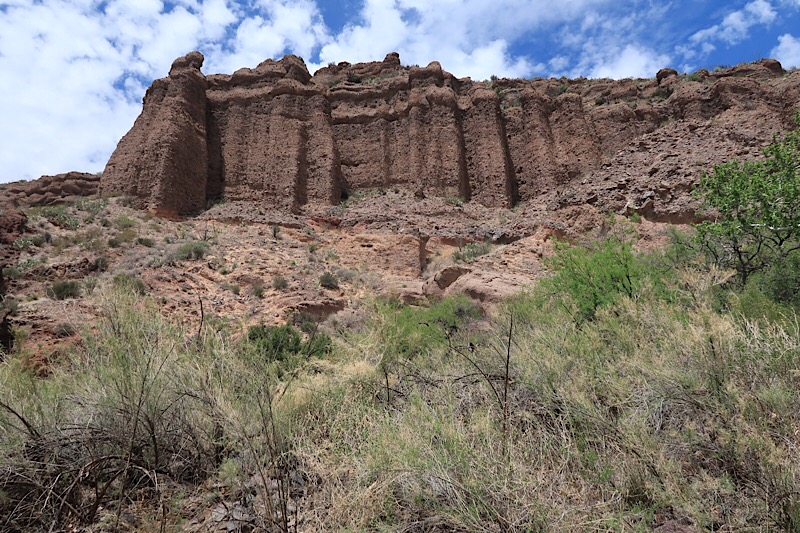 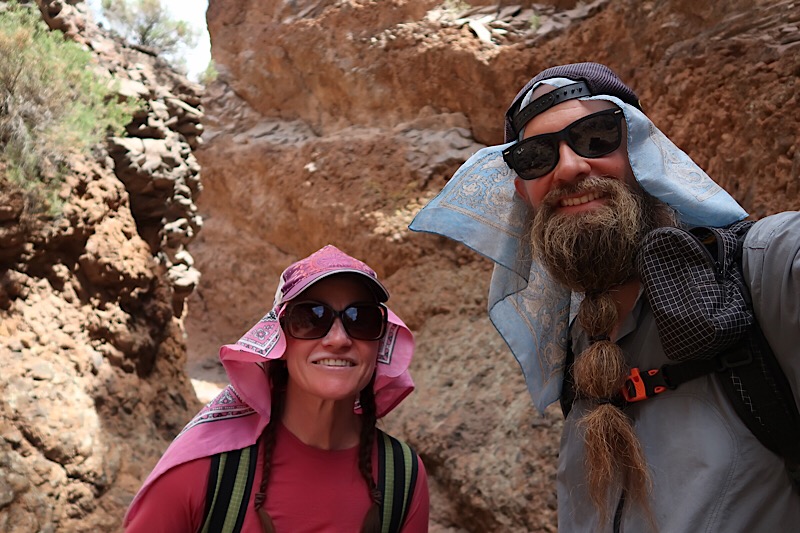 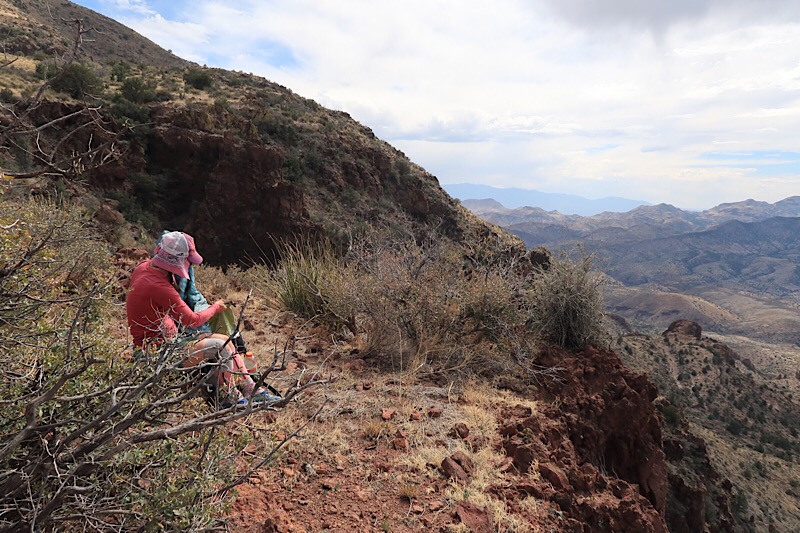 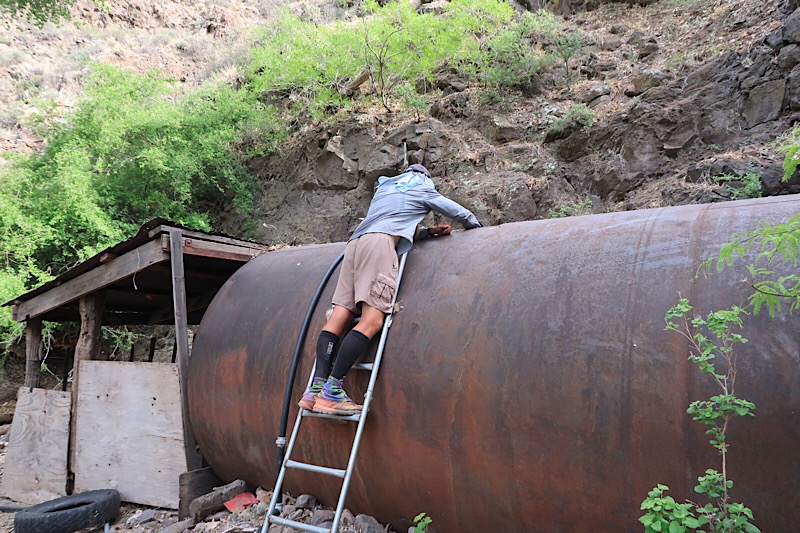